I absolutely loved my experience attending the 2016 Osaka Grand Sumo Tournament on Thursday. I won’t bore you with all the details of the sport. If you want to know more about sumo wrestling, check out this English guide here. There are six “grand tournies” per year, 3 in Tokyo, 1 in Nagoya, 1 in Fukuoka and in March, they come to Osaka.

It is such an unusual sport. They maintain many of the traditions and religious aspects that surrounded the sport 1,500 years ago. For example, after each tournament, they publish a banzuke, which is a ranking of all 800 professional sumo wrestlers. Instead of a straightforward list, it is printed in an ancient format. It is like the top 10 college football rankings to be written like the Declaration of Independence, with cursive letters from a quill pen. The ancient customs mean the wrestlers go through the all the rituals like throwing rice to “purify the ring”, the referees where traditional folkloric costumes, etc. The wrestlers choose ring names, like  Egyptian wrestler Abdelraham Salel’s “osunaarashi” which means sandstorm in English. He won his match against a Mongolian. 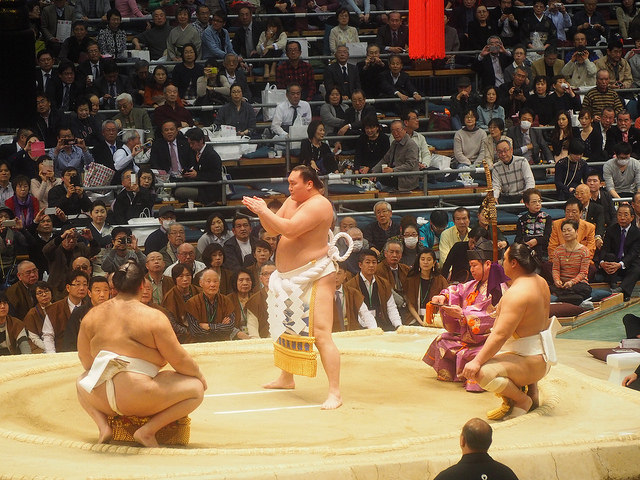 Above is the greatest wrestler in the history of sumo, Hakuho Sho, the winner of 33 grand tournaments, the most ever. He went 86-4 in two consecutive seasons. He is performing another shinto ritual before the matches begin in the final round.

I can see why the guys are so fat. The object of the sport is to push your opponent out of the ring or have a body part other than the soles of the feet touch the floor of the ring. The heavier one is, the harder it will be to move them. I wonder how professional American football players would do in this sport. The sumo guys are big and they must train really hard, but I wonder if one applied the latest techniques in strength training, nutrition, advanced statistics, film analysis, etc. I would like to know more about the different techniques used by the wrestlers.

The stadium in Osaka is unique in that you can get up close and personal to the wrestlers. You can stand in the hallways as they enter and leave the ring. We also saw many outside the arena, getting lunch at Family Mart or taking a taxi. Hilarious to see these big guys wearing robes and sandals walking through the streets. Their hair smells like chamomile which is another ancient ritual. I wonder if the guys really believe in shinto rituals or they do it because they have to and it is part of the sport. I think it makes the sport more appealing. The top wrestlers make a lot of money and have beautiful wives, which should not have surprised me. Beautiful women seem to come with money.

I will definitely go again, just not with the kids as they didn’t have the patience to sit through so many matches. There are bouts occurring all day, with the lower rounds starting in the morning, culminating with the masters in the late afternoon. It is a 15-day tourney and the wrestlers fight daily in round-robin style. The best record wins.

I will end this post with a portion of Hakuho’s pre-match ritual. He is the greatest off all time!