The video above shows Owen scoring on a penalty kick in yesterday’s game at the school.  He was taken down in the box by a Canadian Academy defender. He cooly delivers a hard kick, which the goal keeper guessed correctly on, but it was not enough to prevent it from scoring. The game ended in a 3-3 draw.  Owen came out in the second half with a muscle strain. He is really enjoying soccer this year.

I am so happy the boys got haircuts last weekend, they were looking pretty shaggy. Ollie and I are shown afterwards below. 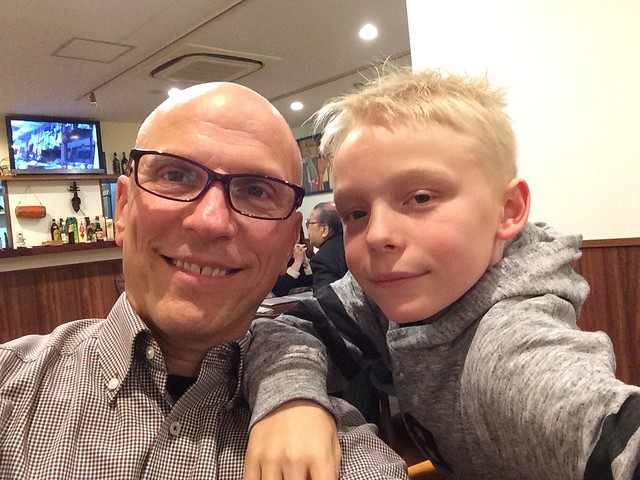 A good Japan story. Yesterday I was leaving the supermarket on my bike with a basket full of bags. As I just started to cross the street, one of the bags fell out, of course the one with eggs in it. About half the pack broke on the street. Before I could park my bike and start the clean up, one person came over and picked up the bag, another person gave me a new plastic bag, to put the rest of the egg in, and they helped me get out of the street and back on my way. The cars also waited patiently until the mess was cleared, no horns or mean looks. The Japanese are so aware of the plight and feelings of others. It is nice to live in a society that thinks that way.

I am still trying to understand why Japanese homes and apartments do not have insulation. My daily routine in the winter is to go down stairs to turn on the heaters before the kids and Nadia come down. The house gets really cold if the heat is not on. The windows are single-paned and the walls and roof have no insulation. I find this strange in a society that appreciates the finer things in life, like food, clothes, cars, etc. Why not be comfortable in winter without having to close doors, wear warm clothes, etc. Osaka is not terribly cold in the winter, only a couple times it has dipped below freezing (0 C), but it feels a lot colder because in the house, you feel the cold. I Ollie is shown below sitting in front of our gas heater. 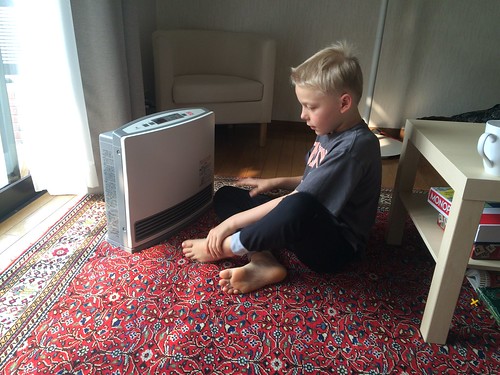