Last Saturday upon dropping off Owen at the train station for his trip to Kobe for soccer, I ran into a large group of students. They were on their way to school. Many Japanese students do go to school for a half day on Saturdays. This may be to do some special test preparation for university or high school entrance exams or special lessons in civics or community service that are not covered during the regular school week.

The boys’ school uniforms are distinct. They are called ga-ku-ra-n, which translates to “gaku-school/student” and “ran-Netherlands”. Historically in Japan, the “west” or all Europeans, were referred to coming from the Netherlands because at the time, they were the most common traders in the few ports that were opened to foreigners. The school uniforms first were designed in the late 1800s and modeled after western military styles. I read where uniforms for boys were modeled after either French or Prussian soldiers. I wonder why they haven’t changed since? Is it the Japanese respect for tradition and uncomfortableness with change for certain things? 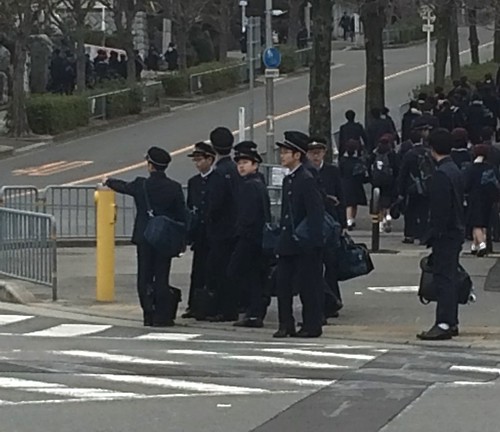 I think it is a good look, however, in putting myself in a young person’s shoes, it must be a bit uncomfortable to where these to school, especially the hats and buttoned jackets. As you can see from the photo above, they do look like soldiers or policemen directing traffic.

Girls uniforms are modeled after naval uniforms. I’ll get some photos later. Some uniforms are more in the British style classic school girl uniform with plaid skirt, tie, and vest. You can see this in the photo below. The girls wanted a photo with my son Oliver and nephew Seby when we were visiting Kyoto this fall. 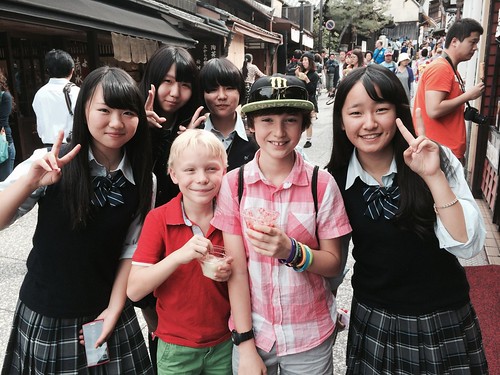 At the private international school I teach at, uniforms are not required. Some girls however, where the British school girl outfit as a fashion statement. Some want us to adopt them as the school uniform, I think because they have been featured in pop culture in television, movies and graphic novels.