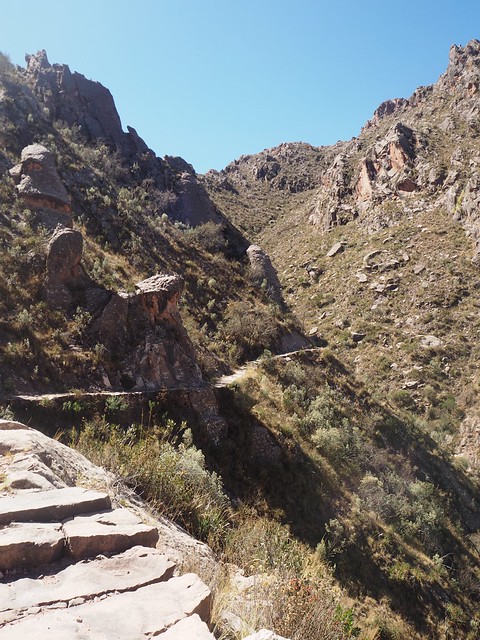 We got an early start and headed out of the city for about an hour and drove to the village of Chataquilla, located at 3,600 meters ( feet). After visiting the chapel at the top of the mountain, which was built over another miraculous image of the virgin Mary. I’ve heard many versions of this folktale in Venezuela and Colombia all the way back to Spain. It must be a Hispanic-America Catholic phenomenon. 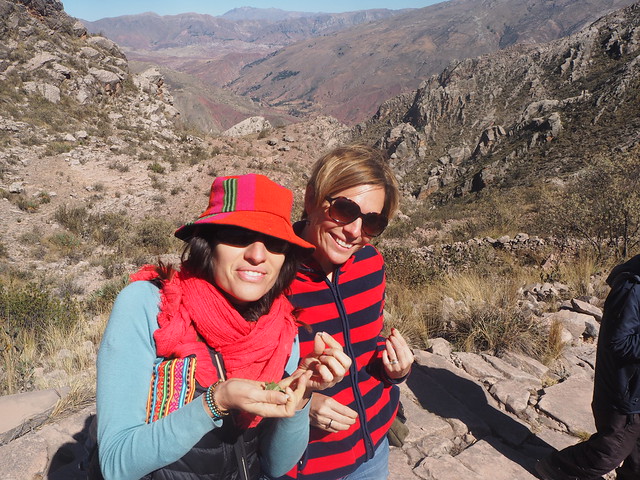 Ale and Nadia sample some coca leaves to relieve the soroche.

The local government restored an Incan road from the chapel, dropping 1000 meters to the village of Chaunaca. The path wound around the steep mountain and there were a few very steep drops. Workers took care to cut and fit stones around the original remaining Incan stones to create a level, 1 – 2 meter wide trail. The entire walk is about 5 kilometers, but at that altitude, it felt like double that. We took our time, taking lots of photos, learning the names and medicinal uses of the plants and sorting out the children’s various needs. The views were spectacular and the sky was a pure blue. It was an absolute pleasure taking in the views of the geology and the many valleys, peaks, canyons, etc. What a great morning!

We were planning to visit another village in the ancient Maragua crater but my sister-in-law was not feeling well so we returned to the hotel. I really want to explore more of the villages outside Sucre. It is a wonderland for mountain biking, rock climbing/scrambling and walking. It would be similar to the American Rockies in the southwest, like the state of Utah.

In the late afternoon we visited La Recoleta convent again for a sunset dinner. On the walk back we stopped in the plaza to get a taste of some of the Bolivian Independence Day celebrations. There was a school parade and lots of vendors, music and people-watching. We had a wonderful stay in Sucre! 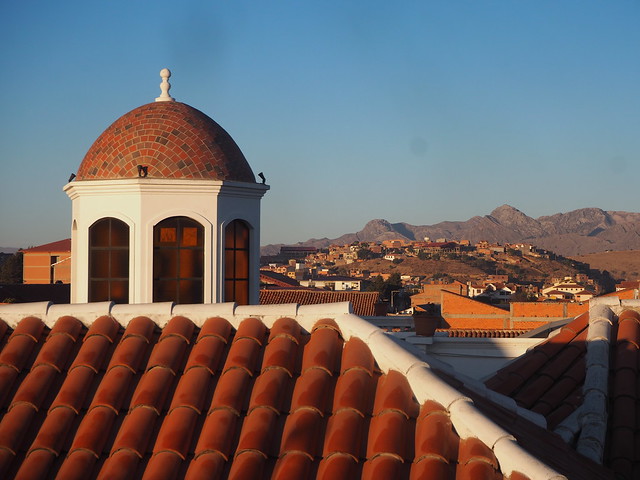 View of Sucre from the roof of our hotel.

Bolivia is awesome for travel and adventure. The combination of a tropical latitude in the Amazon river basin and the widest part of the massive Andes mountains, blows away what most countries have to offer for adventure travel. I do hope to come back and especially as my children get older, I want to share with them the wilderness of Bolivia. My ideal trip would be to spend a week in the Amboro National Park, entering from the Samaipata side and then going to Vallegrande to see where Che Guevara was killed. Next we would go to the highest capital in the world, La Paz. While there we would do side trips to Lake Titicaca and see the village where Modesta is from and climb the snow-capped peak of Mount Sorata. Next we go to the salt deserts of Uyuni, staying in a salt hotel and do a driving tour of the amazing, alien landscapes of the high Atacama desert. There are brightly algea-colored lakes, high altitude flamingos, herds of vicuna and the weird rock formations. We would finish up by visiting two Amazonian parks, Alto Madidi and Noel Kempff and then the pantanal, the largest wetlands in South America. How is that for a trip!