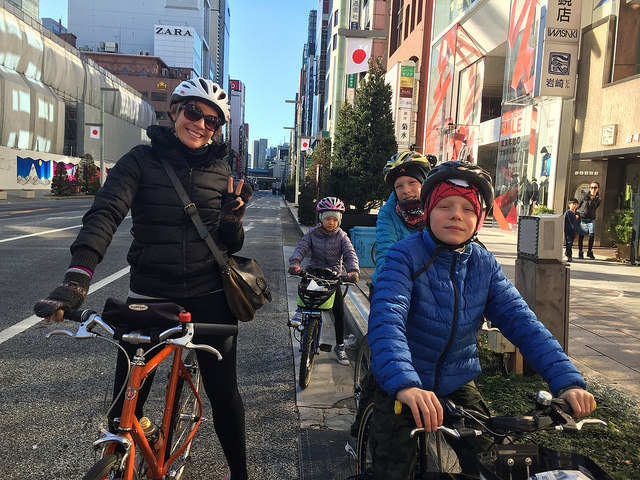 We started the year in perfect fashion with a New Year’s Day bike ride through Tokyo. I highly recommend the Tokyo Miracle Cycling Tour  and I would like to thank Soshi, our guide for giving my family a deeper understanding of Tokyo and a memorable event. The city was almost deserted early in the morning and it felt like we were in a post apocalypse Tokyo. We rode through the skyscrapers of Ginza, the wide open gardens of the imperial palace, the shoppers in the electronics district and much more.

I noticed these roped tires in front of the sumo wrestling Kasugano training stable in the neighborhood of Ryogoku. They fill them with sand and pull them on the street in front of the building for strength training. We also visited the sumo stadium. I hope to go see the sumo when they come to Osaka in March. Below Soshi gave our group instruction on how to pray at a Buddhist temple.

We also rode around the Imperial Palace and Hibiya Park, the largest green space in the city. The police were preparing for the palace open day on January 2, one of only two days the palace is open to the public. The emperor and his wife spoke to 44,000 visitors. The grounds serve as the perfect exercise area. I am not a big fan of monarchs, sacred or otherwise, but it is good that the area is not developed with skyscrapers and roads. 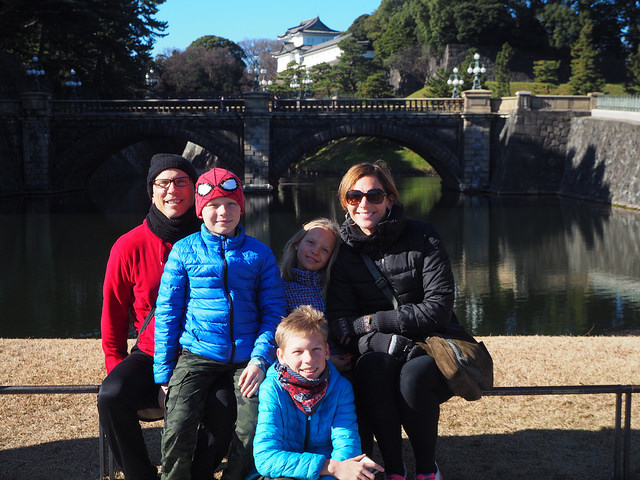 We are pictured at the imperial palace grounds.

Hibiya Park took a special significance as it was featured in my Visualizing Japan course. A thorough breakdown of the 1906 riots that were centered in the park was the second module. I was happy to inadvertently break the rules of the park and play football on the grass. They were off limits to people, but the signs were in Japanese and so we did not know it. A guard respectfully asked us to leave, but not until it was almost dark. I was happy to score one for the common person and use the park as my right as a taxpayer in Japan. I was in solidarity with the citizens during the riots who were protesting unfair train prices and police corruption among other things.

Hibiya Park has probably changed a lot since the riots around the turn of last century.

Our last day in Tokyo was spent shopping in Ginza. January 2 is like “black Friday” in the USA with all the stores offering discounts. We got some good bargains on clothes at the Gap for the kids. We also ate extremely well during the trip and I recommend the Zest Catina (Mexican restaurant) and the Cafe Fredy for their french toast. I will be returning to Tokyo in April for meetings and hope to see a bit more of the biggest city in the world.

Nippon Bashi (Japan Bridge) underneath the famous Kirin. All roads in Japan are measured by their distance from this bridge in the heart of Tokyo.