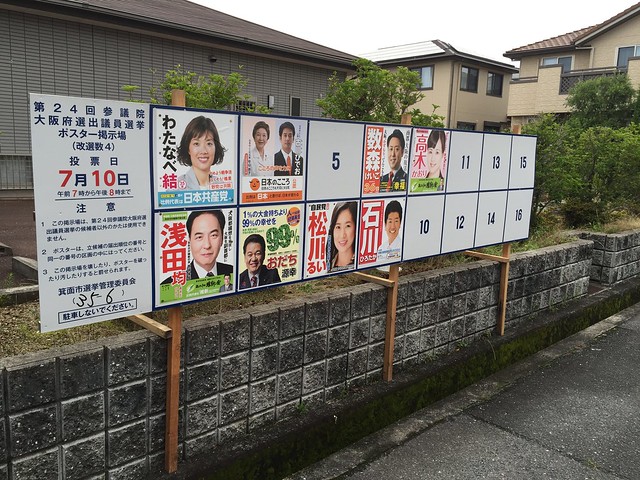 Things are very organized in Japan. One example is the candidate boards at polling stations. This is a municipal office in our neighborhood and in preparation for the election on July 10, the 8 candidates are neatly posted in their positions on the board on the left. One does not see signs haphazardly posted around the city. There are strict regulations for all political campaigning.

This is a historic election because it is the first election where 18 year olds can vote. The voting age was recently lowered from 20 to 18. The election is for the upper house of the legislature. The television NHK was at our school this week filming Kwansei Gakuin university students speaking to the Japanese grade 11 and 12 students about voting. The voting rate is around 50% for most elections here. The 18 and 19 year olds are only about 2% of a population that is heavily skewed to an older demographic, so it will probably not affect the outcomes of the elections very much. I think it is good to get younger people voting and hopefully it will bring fresh ideas and innovation to politics and the economy.