Yesterday we went for a long hike in the MacRitchie Reservoir trail system. The Mac Ritchie reservoir is the one of four nearby large reservoirs that provide fresh water for the city. The forests surrounding the reservoirs are protected as a catchment area and the government has many walking trails winding through it. The highlight was finally seeing the long-tailed macaques (Macaca fascicularis) as we were leaving the reserve. In the video above, on the Country Club Road, a troop were wrestling with each other and they take a bottle from the group of kids behind us. They are omnivores and have a long relationship alongside humans. They are numerous in the central catchment area of Singapore.

In typical rules dominated Singapore, the goal of our hike, the tree-top walk, closed at 4:45 PM and we arrived at 4:51 PM so we couldn’t finish the final loop. I was tempted to hop the chain crossing the entrance to the walkway, but Oliver reminded us of the possibility of caning, a common form of punishment, besides jail and high fines, for breaking rules here. The videos I showed of the case of Michael Fay  and an actual caning earlier in the day, was a good reminder for us to obey the rules while we are here.

I am happy they preserved this forest, on an island that was once all mature forest. The early settlers of Singpore would not recognize fully developed island today. With over 5 million people, here, I see what the island needed to be developed. There were some impressive mature trees and it was nice to walk in the silky humidity of the forest and away from development for the afternoon. We walked about 7 kilometers in total. Outside of the country club, we called my first Uber, and a nice young man who just got off his main work, came and picked us up.

We had a nice meal in the Little India section of the city. Nadia joked that this is the closest she will be getting to India. Although I’ve never been to India, with all of the colors, odors and sounds, it probably was an approximation of India. There are over a quarter million Indians living in Singapore. Most came through contact with the British empire as workers in the 19th century. Today there is immigration from India and the community is noted for its economic and cultural diversity.

We were chased out of the market by an oncoming storm. There has been some spectacular lightning and storm clouds and loud thunder. There are thunderstorms on 40% of the days in Singapore. December and January are in the “wet phase” of the 4-month north east monsoon season, and there are usually storms or heavy clouds every afternoon and early evening. I am loving the 1 degree north tropical heat, the sounds of the birds and the lush gardens. It reminds me much of Santa Cruz, Bolivia, except much cleaner and better maintained.

Finally to wrap up this Singapore journal entry, I have to leave with “the sign” of the blog post. We are loving the ubiquitous signage, educating and informing Singaporeans and tourists how to live an orderly life. The sign below was outside of the restrooms at the Mac Ritchie Reservoir visitor’s center. 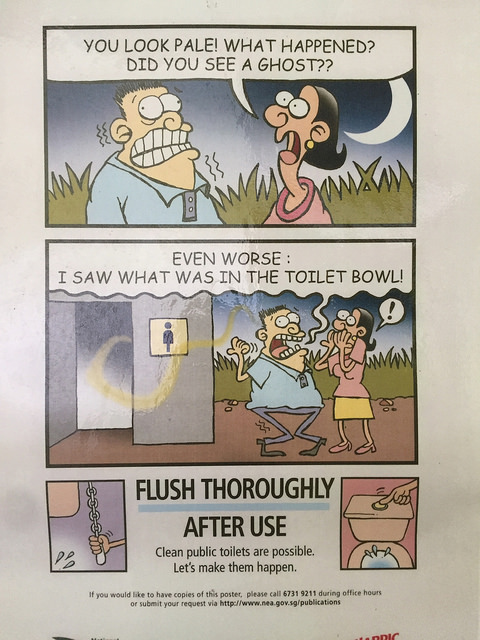 One thought on “Exploring the “wilderness” of Singapore”