I wanted to get out of town for the day so we rented a car and headed to Awaji Island. It is the largest island in the “inland sea”, the water between the main islands of Honshu, Shikoku and Kyushu and it is a short cut between the Sea of Japan and the Pacific Ocean. Awaji forms the east side of Osaka Bay and it was only about a 2-hour drive to Keino Matsubara (black pine) beach, our first destination.

Beach season does not begin in Japan until June, so there were very few people. The water was nice and the kids enjoyed skipping rocks and catching moon jellyfish. The beach gets its name from the huge stand of black pine trees which house a camping area. The pines are beautiful and always remind me of the white pine stands next to Lake Superior in my home state of Michigan.

We bought several bags of onions on a roadside stop. Awaji is known for its onions and there were numerous farms, interspersed with forested hills. Bicycle companies promote it as an ideal150-kilometerr circumnavigation ride, which I would like to do someday. The Naruto whirlpools were a disappointment, reeking of “tourist trap”, but there were nice views

The Naruto whirlpools were a disappointment, reeking of “tourist trap”, but there were nice views of the bridge and the strait. The sea level differences between the Pacific and Seto inland sea cause strong currents under the bridge. At certain times whirlpools form, but when we visited in the late afternoon, there were just lots of currents, but no whirlpools.

It is a perfect weekend get-away and I found the day relaxing. Owen stayed home because he is battling a bad cold. He also was tired from a volleyball tourney which I will blog about later this week. 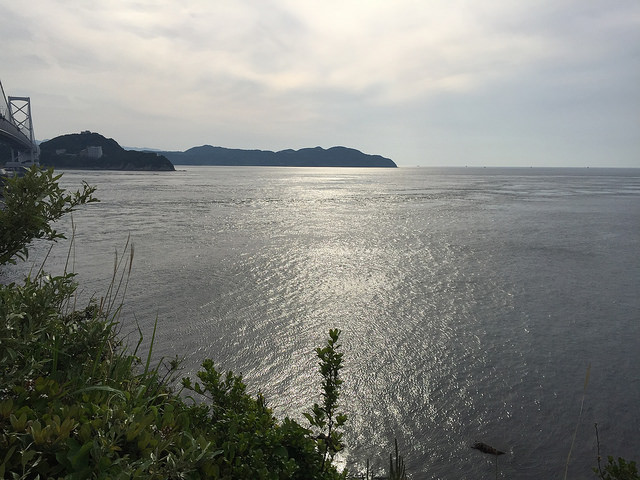