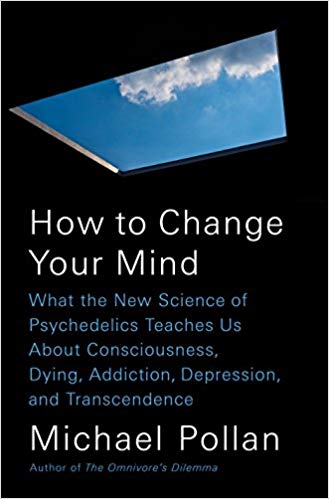 Michael Pollan, the Harvard and California-Berkeley professor is one of my favorite thinkers and writers. I have read all of his books and his horticulture and healthy eating books have deeply influenced how I live my life. His latest book, “How to Change Your Mind: What the New Science of Psychedelics Teaches Us About Consciousness, Dying, Addiction, Depression and Transcendence” discusses the history of and current research of using psilocybin and LSD to treat mental illness and for people with healthy minds, a way of bringing meaning to one’s life. I’ve listened to him as he made the rounds of the podcasts I listen to, New York Times Book Review, Slate, Fresh Air, etc. His ideas are engrossing and I am thoroughly enjoying the book.

Pollan illustrates the growth of how psychedelics are being used in conjunction with therapy, to cure people with mental illnesses like depression and addiction and help terminal illness patients deal with death. Doctors and therapists use psilocybin (the active ingredient in “magic mushrooms”) LSD (Lysergic acid diethylamide) and other drugs to break the mind out of obsessive thought patterns of people in these situations. Like many, when I think of “acid” or “magic mushrooms” I think of former Harvard professor Timothy Leary and the 1960s counterculture movement. Pollan shows how medical research into psychedelics started decades before Leary and before the “turn on, tune in and drop out” mantra became popular, scientists were conducting research on how the compounds could be used to help humanity. The current trials of using psychedelics by New York University, John Hopkins, and Imperial College of London are quite promising and it is a shame that reckless recreational use and bad publicity caused governments to make them illegal so long ago.

The most interesting part of the book for me, especially as an educator, was Chapter 5, the section explaining the neuroscience of the human brain on psychedelics. These compounds quiet the DMN (Default Mode Network) of the brain. Discovered in 2001, this network links the cerebral cortex to the deeper, older inner networks of the brain, which control one’s emotions and memories. The DMN controls all of the different networks of the brain, keeping them separate and using the brain’s energy most efficiently to survive and solve problems. The DMN is our “self” or “ego”, or in other words and it is the story we tell ourselves about who we are. This “sense of self” was a great evolutionary achievement and other animals lack such a developed cerebral cortex. However, having a conscience separates us from nature and others. Buddhists and other ancient civilizations have said this for a long time. Even Albert Einstein saw this when he said:

“A human being is a part of the whole called by us universe, a part limited in time and space. He experiences himself, his thoughts and feeling as something separated from the rest, a kind of optical delusion of his consciousness. This delusion is a kind of prison for us, restricting us to our personal desires and to affection for a few persons nearest to us. Our task must be to free ourselves from this prison by widening our circle of compassion to embrace all living creatures and the whole of nature in its beauty.”

Pollan also interestingly talks with researchers working with children. Young children do not have the ingrained patterns of thought of adults and this section of the book reminded me that often novel or “out-of-the-box” solutions to problems come easier to younger people who do not have such a highly developed DSM and entrenched thinking patterns as adults.

Psilocybin and other methods like meditation, fasting, etc. quiet DMN activity and the ego dissolves. This allows the other brain networks to connect with each other and you get all sorts of crazy ideas, visions, feelings, memories, etc. The DMN also filters what input we take in. This helps us get things done and not staring at the clouds or sunlight filtering in through the window. However, something is lost. When the networks are able to connect and take in stimulus from the environment that is usually filtered, sometimes profound insights and new ways of thought take place. That is why people often say they have been profoundly changed after an acid trip.

Pollan describes his experiences in trying psilocybin, LSD, toad venom and ayahuasca. He is a California Berkeley and Harvard professor and celebrated author so he is not going into these like a hippie from the 60s. Pollan is also in his 60s and entered it with fear of heart failure and the impact the experience would have on his health. He experiences these “trips” with a trained therapist who guides him through taking the drugs and then making sense of it afterward. Pollan is enthusiastic about “healthy normals”, people without mental or a terminal illness using psychedelics to reinvigorate their minds and see life through the filters of a range of their brain networks. It is like a brain “shake-up” and it changes how one interprets the world.

Pollan makes a compelling case for trying psychedelics, especially older people in controlled situations. In his detailed history of psychedelic research and use, he discusses the risks and rewards. I do not want to sound like former Harvard researcher and doctor, Richard Alpert, now Ram Dass, and do not think it is for everyone. However, as I enter late middle age, it may be a good way to refresh my thinking and redefine meaning in my life. I never would have considered trying it, but after reading this book, I see the potential benefits. The book also reinforced the practice of meditation and how good it is for the mind and I should be doing more of it. Currently, most psychedelics are illegal and there is still a negative view on their use in our society, but more government agencies and universities and hospitals are changing their thinking about this. After reading about the research taking place at New York University, Johns Hopkins, London, etc., it seems like they should be used more in therapy.

I highly recommend the book. It is a long, detailed read but worth the time investment. Below are some other notes I picked up from the book.

One thought on ““How to Change Your Mind” Michael Pollan”