We attended a muay thai martial art match during our time in Bangkok. The sport is called the “art of the eight limbs” because the 2 fists, 2 elbows, 2 knees and 2 shins are used to strike the opponent. Elements of muay thai have made it into the mixed martial arts (MMA) which is currently popular in the USA. I am not a fan of violent sports like this, but I went for the cultural experience. As you can see in the video above, there is a pre-fight ritual dance. There is live music played during the pregame and matches. I think it is some type of Buddhist music and dance, but am not sure. The Thai people have fought for centuries, as the city-states and ports, wrestled for control over the vast forests and rivers of southeast Asia. It makes sense that they would develop their own form of martial art. 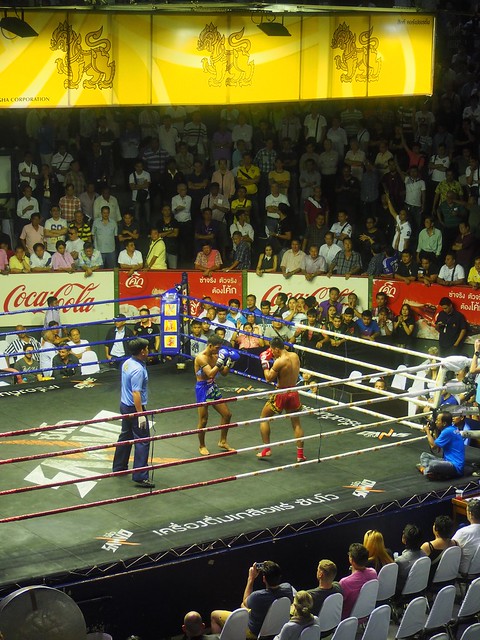 We had ringside seats and it was quite easy to arrange tickets from our hotel. Thailand is set up for tourists and the expensive, ringside seats were exclusively for tourists while the locals were higher up in the stadium. It was a regular Monday night card of 9 bouts at Rajadamnern Stadium . The first matches were young guys, probably between 16 and 19 years old. Thais are quite small and the weights for the fighters ranged from 103 pounds to 123 pounds. They were in peak physical condition however, and I would not want to fight them. Their chiseled physiques were evidence of years of intense conditioning. 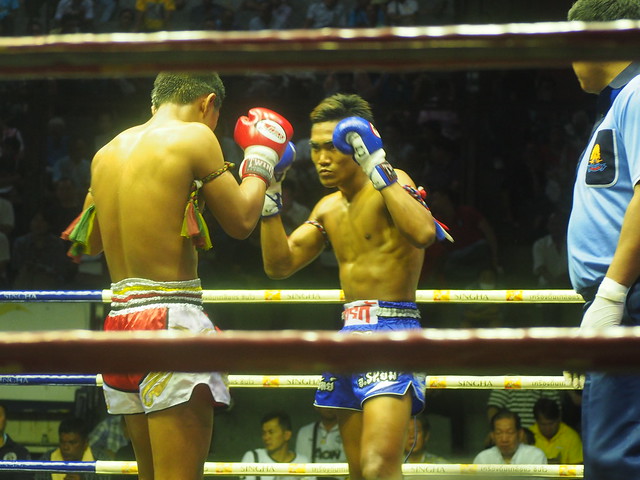 Fighters in the first round and initial stages of the fight did a type of a rhythmic step while sizing up the opponent and delivering few kicks or punches. As the fight went on they became more aggressive. Bouts lasted from 5 to 9 rounds of 3 minutes each. I was surprised that it was a lot of clinching. They would hold each other around the shoulders and use their knees to deliver body shots.

In the featured match, Kuman Doy knocked out Phet Kriangkrai. It was an even fight until one shot to the head put down poor Phet, who had to be taken out on a stretcher. 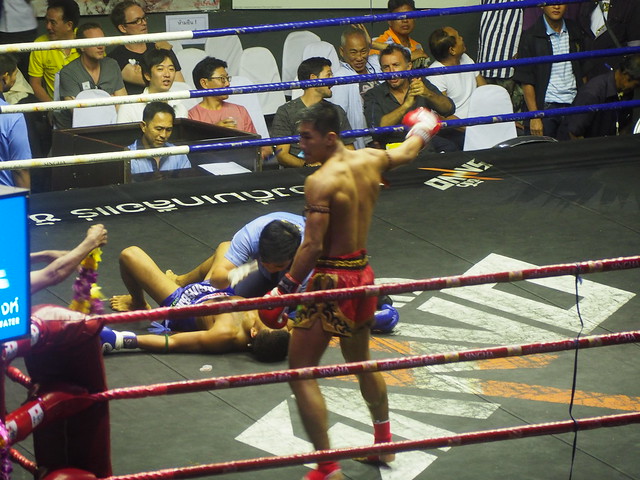 It was fascinating to watch the trainers prep the fighters between rounds. They would douse the fighter in water and give vigorous muscle massages. Each fighter had two or three coaches who during the massages, would scream instructions and advice to them. Each fighter, especially the more experienced, had family and friends supporting them in a section behind their corner. In the crowd, people were betting with informal “bookies” who would be holding up two or three fingers. I am not sure what exactly they were betting on.

I wondered about the young men who participated in this sport. Were they poor and had to do it to try to get out of the cycle of poverty? It would be a tough life and I felt a bit sad for them. I would not go back again, but it was a fascinating evening.

It reminded me of the last time I went to a martial art event. When I was a child, my father took my brother and I to Brown County Arena in Green Bay, Wisconsin to watch professional wrestling. These were the 1970s, way before cable television and the WWF and on Saturday night, we used to watch the American Wrestling Association  a professional wrestling promotion company based in Minneapolis, Minnesota. There were some great characters like “Mad Dog” Vachon , Baron Von Raschke and Andre the Giant. As kids we loved the and I remember how exciting it was to go and see it live.