I am getting in touch with my family roots here in Pennsylvania. Both sides of my biological family are from Pennsylvania’s Coal Region, located in the north east part of the state, in the Appalachian Mountains. The largest cities in this region are Wilkes Barre and Scranton. It is the location of about the only place in the USA where anthracite could be found. Anthracite is the purest form of coal, consisting of 92-98% carbon. From the mid 19th century to the mid 20th century, this was a big industry here, peaking in the 1920s. Today there are a couple of small specialty mines still in operation, but for the most part, the industry is dead, with most of the good coal gone and competition for other countries and other forms of fossil fuels, most notably natural gas making it unprofitable. This triangle of 5 counties helped fuel the industrial revolution in America, propelling steam engines and producing steel in the big foundries in Bethlehem. Waves of immigrants came to work in the mines, most notably Irish, but also my ancestors from Eastern and Central Europe. The Molly Maguires a 1970 movie starring Sean Connery, portrayed the radical Irish group, the Molly Maguires, who fought for mine workers’ rights in an age of exploitation. The stories of mining accidents, low pay, and the struggles of these immigrants to make a living are sad and often tragic. Although many of their ancestors benefit today from life in America.  My son Ollie (photo above) found this piece of anthracite coal in an old strip mine, just outside the town of Freeland last week.

The industrial revolution was an environmental disaster for the region however. First, as in many places in the USA, including my home region in the Upper Peninsula of Michigan, the land was clear cut of the majestic white pines and hemlock trees that covered the mountains here. Canals were dug and railroads put in to transport materials to the cities on the east coast and steel plants in the Lehigh Valley. More than 70 years later however, the Appalachians (this part of the chain is called the Pocono Mountains) are making a comeback. We rode the 25 mile bike path from White Haven to Jim Thorpe in the Lehigh Gorge State Park this weekend. I was proud of the kids of making the whole way. The views were stunning! We took an old tourist train through the valley and rode down. There are also lots of whitewater rafting and hiking in the park. I hope to explore more of it while I am here and glad that an area that was once a denuded, polluted, “super highway” is now going back to nature. 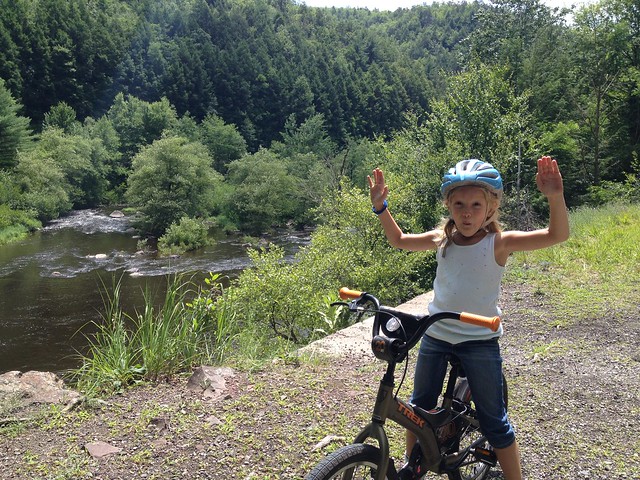 The mountains, although not the size of Rockies or Alps, have their own stunning beauty and it does remind me of the Great Lakes Region of Northern Michigan. In mid-summer, the sheer walls of green, the brown rapids of the Lehigh River, and the bright bloom of Mountain Laurels, makes for a pleasant place to relax and recharge.

I will be exploring more of the Pennsylvania Coal Region this summer and exploring my family’s past here as well.