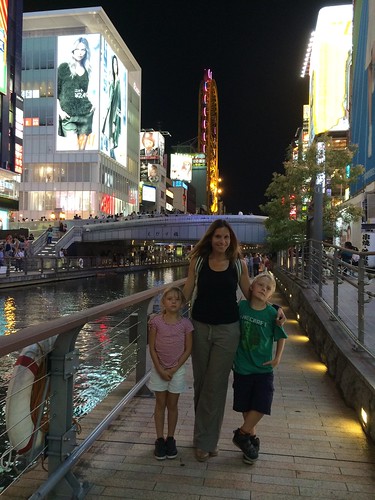 Last night we ventured to the heart of Osaka to the famous neighborhood of Dotonbori. This is the crazy stereotypical urban Japan at its finest, with huge neon billboards, throngs of people, deep-fried octopus dumplings, steaming ramen restaurants, crazy fashion and futuristic designed buildings.

Yasui Doton designed this area as an entertainment hub over 500 years ago. HeThe entrepreneur dredged a canal (bori comes from hori, to dig) of the tiny Umezu River. The area was always zoned for entertainment and originally was a theatre district, the last theaters being destroyed in WWII. 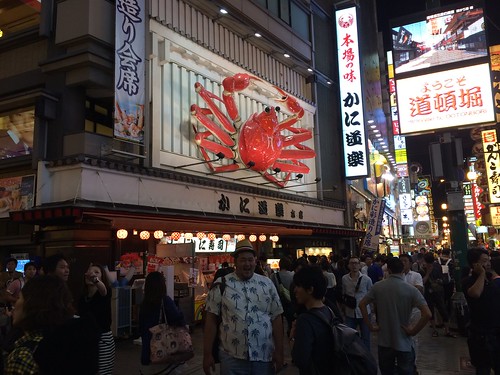 Dotonbori today reminded me of a nicer Times Square. The canal at night is surprisingly peaceful, despite the tour boats passing by and the thousands of shoppers and eaters passing overhead. The number of shops are restaurants must number in the thousands. As it was our first time, we were a bit overwhelmed and with the kids being a bit tired, we struggled in finding a suitable restaurant for a family of 5.

There are several icons of Osaka, which is the food capital of Japan. Above the restaurants there is a  giant mechanical crab, octopus, and fugu fish, all advertising the cuisine of Osaka. We stopped to take photos in front of  the Glica Running Man, which is a symbol of Osaka. The giant neon sign was taken down by the candy company Glica, and in its place is a regular billboard portraying a running girl. They did have a small version of the original for tourist. The buildings in Osaka are amazing. The designs and lighting are futuristic and sometimes you feel like you are in a sci fi movie like Blade Runner.

Dotonbori is located just outside the Namba Station, one of the hubs of the Osaka train system. It is certainly exotic and if you are not bothered by crowds, it is a good night out. We will go back again now that we know the place a bit, and sample some more of the Osakan cuisine.

One thought on “The Times Square of Osaka: Dotonbori”