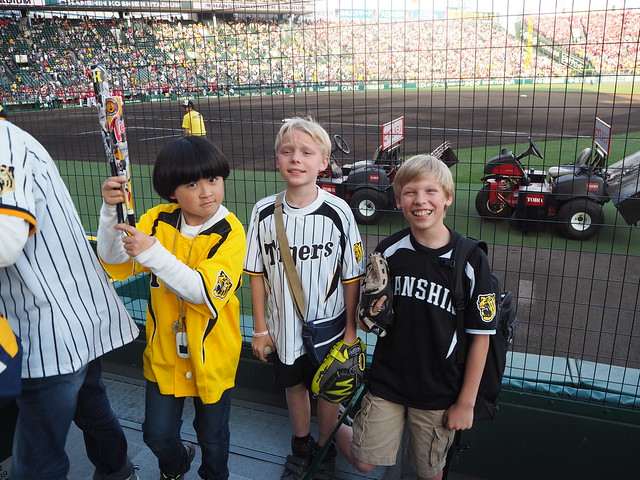 The boys and I went to Koshien stadium again last weekend to watch the Hanshin Tigers host the Hiroshima Carp in the Japan professional baseball league We had a great time, however, the Tigers lost 2-7 and fell to 15-20 for the season, good for last place in the Central league standing, just below the Carp who improved their record to 16-18 with the win.It was a gorgeous day and a full crowd at Koshien stadium. and we had a lot of fun. The left field section was a sea of red Hiroshima supporters. Leading the way for the Carp was catcher Tsubasa Aizawa, who went 3-5 with a home run and three RBIs. Yuya Fukui pitched 7 innings and allowed only 1 run. Randy Messenger, the import pitcher for the Tigers, lost, allowing 5 runs in 6 innings of work. Particularly disappointing for the Tigers was Mauro Gomez, who struck out twice and weakly grounded to third twice with runners in scoring position. The bright spots for Hanshin was our man, Tsuyoshi Nishioka, who made several brilliant fielding plays at third base and had a clutch, two-out hit to drive in their first run. (He has the best individual player song.) Toritani, the shortstop also had a double and triple, and was robbed of another big hit by a spectacular catch by Carp centerfielder Yoshihiro Maru. Matt Murton, another import for the Tigers, did not play today, although during batting practice, he gave Oliver and Kenta rubber wrist bands and said hello. It made the boys day.

The passion the Tiger fans have for their team is incredible. Like in the US around some professional teams, people get dressed up to go to the game and make a full day out of the stadium experience. I enjoy going occasionally, but it is a serious time commitment. Considering the 1 hour drive to the stadium and 3-4 hour games, it does take up a day. I think it is fine once in a while, but I would never be a season ticket holder or go every weekend.

I taught the boys how to score a baseball game. They also got down to the field and watch the teams take infield practice and batting practice. One does not appreciate the skill and athleticism of professional baseball players on television. In person, you can see how every throw they make it perfect. I think they now like baseball and I hope to get them to play on a Japanese club in the neighborhood besides the school team. We shall see.

2 thoughts on “Oh No! Hanshin Tigers are in Last Place.”