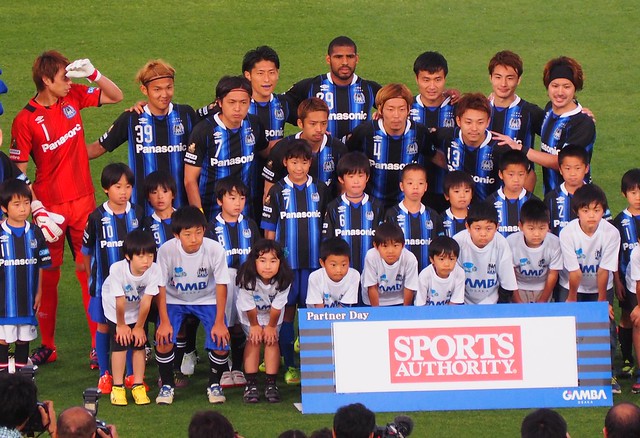 We just got back from attending the  top professional soccer league (J-league Division 1) game between the local Gamba Osaka versus south Tokyo-based Kawasaki Frontale. The top player for Gamba, Usami #39 (back row, second from left) scored in the 43rd minute of the first half. Kawasaki equalized in the 81st minute of the second half and the game ended in a 1-1 draw. I thought Gamba dominated the first half and Kawasaki the second, so it was a fair result. 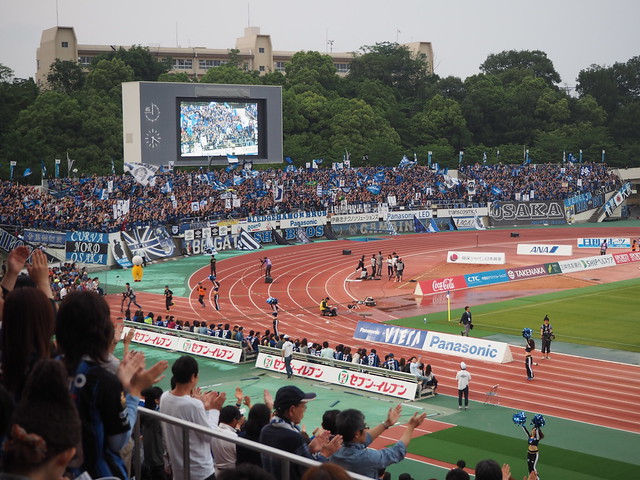 The “Gamba” comes from the Italian word for leg and the Japanese “gambate – go for it”. They seem to be modeled after Inter Milan and I did see some Italian signs of the fan clubs around the stadium. They are the defending J-League champions, but are third in the table this year, behind FC Tokyo and Urawa Red Diamonds. There biggest season was in 2008, when they won the Asian version of the Champions League. The team started from the defunct B team of cross-town rival in the J-League, Cereza Osaka.

Gamba plays in Expo 70 stadium which is very close to our house in Minoh. They are building a new Suita Stadium, which is close by the current stadium. It will open next season. Both stadiums are in the Expo ’70 or Bampaku park and it is a really nice area. We bike and run around and in the park often.

My favorite player for Gamba tonight was striker Takashi Usami. He is only 23 years old and an aggressive, exciting player. He took a lot of shots on goal, which I like to see. He spent a couple of years in Germany, one playing for Bayern Munich. Attendance was over 18,000 and the stadium, although a bit old, was quite comfortable. The crowd was not as big or crazy as the Hanshin Tiger game. A nice evening out!