We have been playing the Bolivian dice game of cachos. I remember playing with Nadia a lot when we were living here, and when I saw the game in a souvenir store last week, I bought one. It is a popular game to play with friends, especially at parties or in bars. The origins of the game are sketchy, but it is said to have been brought to Bolivia by Spanish soldiers, who liked to play dice games.

Cachos is easy to play and I included a scoreboard below. You should make your own for each player, the same format as a tic-tac-toe board. The object of the game is to fill the squares with as many points as possible. Each turn consists of rolling the 5 die out of the cup twice. Players attempt to gain as many points on each of the squares. For example, a roll of three “4” and two “2” would be a “full” and if done on the first roll, it would be worth 30 points + 10 points bonus for the first roll. If a player rolls three “4” and one “2” and on the second roll, picks up the one dice and rolls a “2”, they would get 30 points. Depending on the first roll, you can go from everything from trying to get five “1” or five of a kind. You need to select a square to fill or eliminate at the end of every turn. The Spanish names of each of the squares are included in the diagram. In different parts of Bolivia, they are known by different names. I am not sure why the game is called “cachos”, which means horns in Spanish. 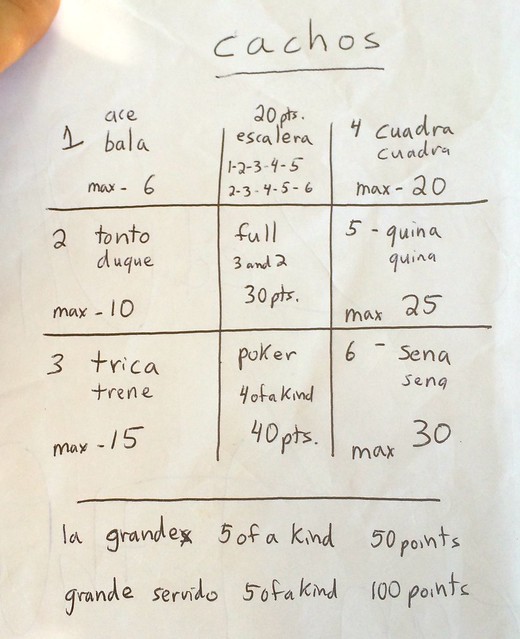 A twist that we play is a player can call “abajo” or “bajo” before lifting up the cup. The results then of the roll are taken from the bottom, instead of the top of the die. For example, a “6” becomes a “1”. 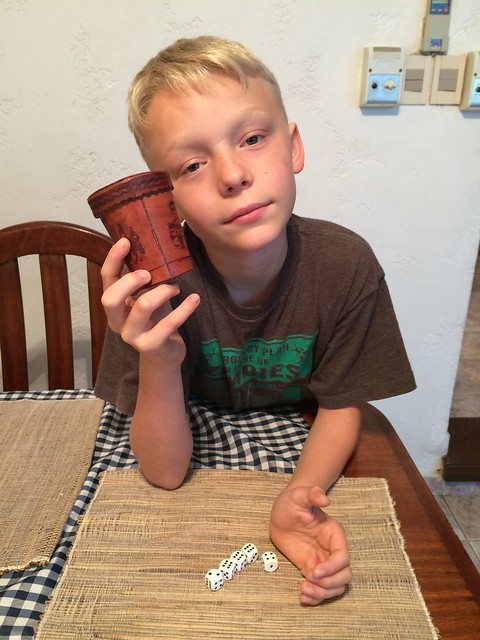