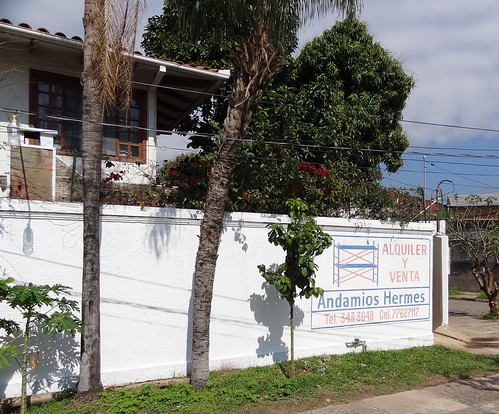 Andamios Hermes is my father-in-law’s business. An andamio is a scaffold and my father-in-law, Hermes Chavez rents and sells scaffolding to small and large construction projects. He got the idea when living in Australia and has been quite successful for the past 10 years. Hermes loved working with metal and was a welder in Australia. He also had a metal factory in Santa Cruz for years that made galpones (metal roofs) and scaffolding for sale.

This is the ideal business for him in his later years. He owns around 400 meters of scaffolding and most of the time, it is being rented. As I say, easy money! Working with Hermes is his right-hand man, Horacio Surubi. Horacio has been working with the family for a long time. He is originally from San Jose Chiquitanos. You can always identify the scaffolds by the green and white colors, the colors of Santa Cruz Department. It keeps him busy, with either calling customers to remind them to pay or check on the status of the rental or dealing with clients either picking up scaffolds or dropping them off. There are also the details of paying Horacio, upkeep of the scaffolds, etc. It is not a full-time job, however, and gives a pace that an older gentleman can keep up with, as well as, giving him a good income in his later years.

They rent to both small constructors, who will rent one module for a couple of days, and also to big companies like Palco Cement, who has rented 50 modules for several years. There are lots of construction projects going on in one of the fastest growing cities in the world. Best wishes for continued success for Andamios Hermes.