Yesterday we visited the UNESCO world heritage site of Nara Park. Nara is about an hour away from Osaka and is the home of the world’s largest bronze statue of the Buddha Vairocana. The temple that houses the statue, Toodai-ji, up until 1998, was the world’s largest wooden structure. The temple is 57 meters long by 50 meters wide. 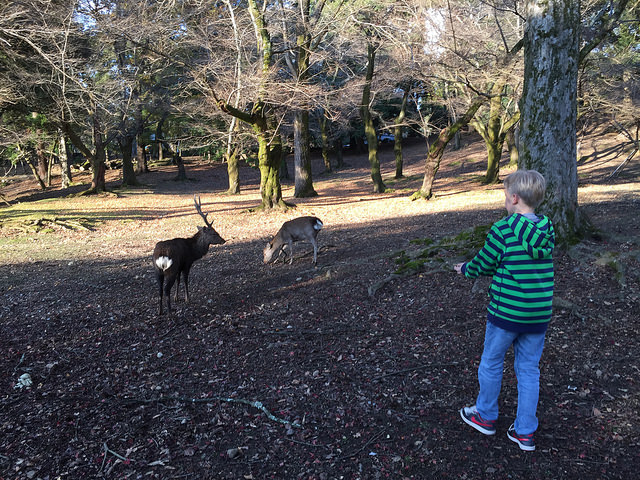 There are 8 temples located in the large park in the forested foothills on the edge of the city of Nara. The coolest aspect are the over 1,000 sika deer that roam free in the park. The deer were once regarded as sacred because of an ancient legend that claims the Japanese god of martial arts, Kashima-no-Kami (the Japanese equivalent of Scandinavian Thor or Slavic Perun) came to the site riding a white deer. The deer’s status as sacred was dropped after World War II, when the rightist government lost of the war and moved towards a secular democracy. The deer are protected today. They scared Ocean quite a bit. They are everywhere and many lost fear of humans. You can pet them and admire them up close. We saw wild sika or spotted deer last winter in our trip up to Kinosaki, on the Sea of Japan coast. I blogged about my deer behavior observations in my nature blog here.

The buddha statue is massive and worth seeing once. I read of relics of an former emperor (tooth, swords, etc.) are in the knee of the statue. There are many side temples and garden on the grounds. The main temple is called daibutsu and you can’t miss the size of the temple. Impressive how these were built so long ago. Of course through the years they have been rebuilt, with the last major reconstruction taking place in the late 1700s. The temple was actually larger when it was first built.

Nara was the capital of Japan for almost 100 years about 1, 300 years ago. Japan has had a sophisticated, urban society for a long time! It is certainly worth spending the day at the park. I want to return to hike in the hills near the park. I recommend to bring a picnic lunch and some sports equipment and make a day of it. The park is big enough to avoid the crowds visiting the temples and museums.

An over 1,000 year inscription of a bodhivastu on the lotus leaf statue in front of the great buddha.

Here is an excerpt from a BBC documentary series about Japan and the park.