I just returned from three days of skiing at the Norikura Kogen ski resort in the beautiful “Alps” region of Japan. I was chaperoning a school trip and we used the services of North Star  which specializes in youth groups. The Norikura mountain range is in the Nagano prefecture on the main island of Honshu, pretty close of Tokyo. It is a large state, and it is as far away from the sea one can get in Japan. The 1998 winter olympics were held in Nagano, mostly in another area called Hakuba. 9 of the 12 highest peaks in Japan are found in the prefecture.

Before moving to Japan, I never really thought that Japan would have such great skiing. But it makes sense. The country is mostly mountainous, located far north of the equator and receives plenty of snow thanks to being surrounded by water. Skiing was never a big part of Japanese culture, but in the 1930s, Hannes Schneider introduced lighter skis and bindings to Japan. His family hotel is still running and we are planning to stay there next winter.  After World War II, skiing took off and hundreds of resorts were developed.

People are skiing less in Japan today and many of the smaller resorts are closing. I think part of the problem is it is an aging population, skiing is expensive and young people have digital diversions. I made it a point to have my children learn how to ski and experience the sport. Hopefully they can enjoy the sport throughout their lifetime. I love being outdoors all day with my family and it is a great way to be active in the winter. It beats watching computer screens.

I am returning to Nagano prefecture tomorrow with my family for a week of skiing in Shiga Kogen. However, I injured my knee at Norikura on the last day. I was showing off and skiing off trail when I hit a tree. I tried to abort and crashed my knee into the slope and the tree his my inner thigh. A close call. I skied for another hour, but when I got on the bus heading back to North Star, I noticed my knee had swelled. It didn’t really hurt, but today, Sunday, I am still not as mobile as I want to be and it is starting to bruise. I don’t think I tore any ligaments or tendons, but sustained a bad bruise. Nadia is using her Aunt Silvia’s alcohol and salt compress technique to speed healing. It is starting to bruise and the swelling is going down, but just not as fast I would like for it to go. I really want to be ready to ski with the kids on Tuesday.

The skiing at Norikura was spectacular! Being mid-week in March, the slopes were almost empty. There were 20 different runs off 8 lifts. There was a mix of groomed and wilder runs and one of the runs had slalom gates which were a blast! It is a drier snow in that part of Nagano, so despite sunshine and warm temperatures, the snow was not icy. It was interested that driving the 40 minutes up the mountain from Matsumoto to the resort, snow appeared only as we neared resort. There was plenty of snow to ski without the need for artificial snow.

I will be looking for one of Japan’s most loved novels, written by Nobel laureate Yasunari Kawabata, “Yukiguni” (snow country), which is set in a snowy town (Yuzawa) in Niigata, which is northeast of Nagano. I’ll be posting from our ski trip in Shiga Kogen. 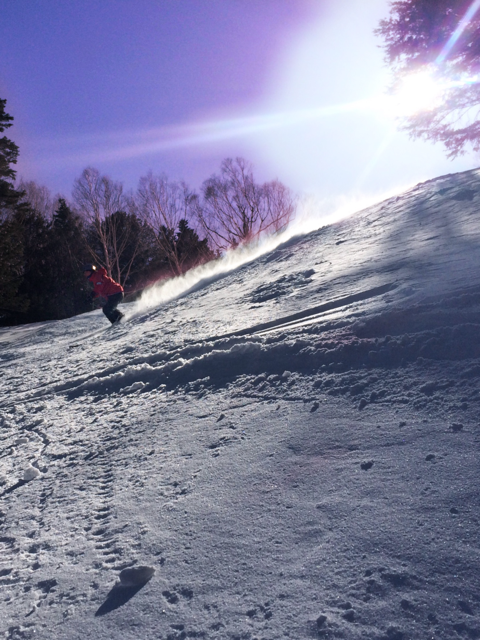