Shiga Kogen is the largest ski resort area in Japan. The 19 separate resorts are interconnected so one can ski from one to another. Owen and I on Wednesday just kept going left and found 6 different runs, including a course that was part of the 1998 Olympic downhill run.

It has snowed everyday we have been up here. The photo below shows the kids digging out our car in the parking lot of the hotel. We were worried that in late March there would be a lack of snow, but there has to be over a meter of snow. It reminds me of my growing up in the Upper Peninsula of Michigan. The squeak of the tire on the snow and ice covered roads and the quiet that comes with falling snow, brought me right back to my youth.

The entire mountain range is part of the Joshin’estu-kogen (kogen means highlands) National Park. The Shiga Kogen ski resorts are about 50 kilometers north of the town of Nagano and 250 northwest of Tokyo. The more famous Hakuba ski resorts are close by and cater to foreigners more than Shiga Kogen. That means there are much less people here and some of the slopes are nearly empty, especially the ones further away from the hotels. English is not spoken here much so it helps to have some bilingual people in your party. Our hotel is Japanese-style with the rooms consisting of tatami mats and us sleeping on futons. The food is excellent but mostly Japanese cuisine. They also have a public bath as the bathrooms in the rooms are those plastic “trailer” type so going to the “onsen” is much more comfortable, except for the fact one is nude with possibly strangers.

Most importantly for me, the kids are having a wonderful time. We are with two other families and they are having a grand time together, staying in the rooms, skiing both during the morning with lessons and free skiing in the afternoon and evenings. We are planning to go see the famous “snow monkeys” on our way back home. Last night at dinner there was a big commotion when they spotted a monkey coming down from a branch and walking across a snow bank. It is so strange to see monkeys in cold weather as I associate them with the tropics. There are a variety of runs, mostly beginning and intermediate so it is perfect skiing conditions.

Nadia does not ski but yesterday she went with the other adults on a snowshoe hike to a lake. It was a good workout and the scenery was stunning- an absolute winter wonderland! I only got to ski one day as I am still recovering from my accident on last week’s ski trip with the students. My left lower leg was swollen after a day on the slopes, which indicated that I came back a bit too early. I was the support team for the kids while getting a chance to work on my doctoral classes.

I will be sad to leave “winter” and head back to spring in Osaka. It is so nice to live in a country with the four seasons. The mix of beaches, forests, cities and mountains makes travel within Japan interesting. 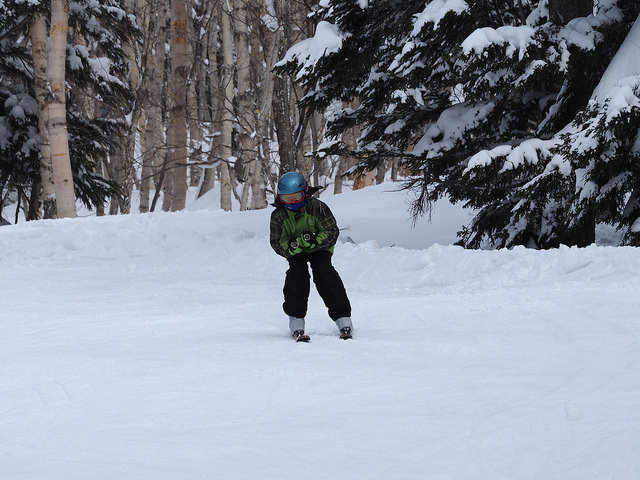