I should be writing more as it relaxes me and allows me to collect my thoughts. I also capture those small, fleeting moments in life.

Oliver last night was in a panic. At 8:30 PM he tells me he left his uniform and shoes in his locker. He has a volleyball tournament today and needs to be at the train station at 7:00 AM to travel to Kobe. The school does not open until 7:00 AM. I calmed him down and this morning we rode to the school at 6:45 AM, asked the guard to open it early and we rode to the train station and got him on his way. He was truly thankful for my support. It was nice to help him and hopefully, he learned his lesson to prepare the night before. Procrastination runs in our family 🙂 so I know what he is dealing with and to lower stress in one’s life, one should be more on top of things. I love those mornings when Oliver or Owen have to get to the train station for a sports event. It is quiet and I get to share some time with them. They are a bit groggy being teenagers and need my help in packing their bags and getting them to the station on time.

The highlight of the day was running with Nadia, Owen and Ocean. We did Nadia’s 7-kilometer loop around Osaka University and Kita Senri park. Nadia is leading an elementary “Girls on the Move” club and Ocean is now into running. I bought Ocean some running gear tonight at Sports Depo.

Oliver wanted to see Pacific Rim: Uprising tonight so I rode with Ocean and him and watched the movie. I enjoyed watching Oliver’s reaction more than the movie, but there was a bit of science fiction to the movie which made it tolerable

Catching up in the past week or so, my friend Ilan and I rode the Saigoku Highway to Kyoto. The road was made in the 1600s during the Edo period and has a lot of very cool traditional Japanese homes and temples. We ended up riding 52 kilometers, more than either of us expected. However, it was a really nice day and fun to spend some time with a friend and ride. If I was independently wealthy, that is about all I would do, cycle and hike and explore the outdoors.

Finally, a Japan post would not be complete without an earthquake story. The other night I was up, as the past few weeks I’ve been suffering from insomnia. The house started shaking and about a minute or two later, I went to the Japan Meterological Station website had the quake map on their system. On the map below, we live in the blue, which was a 3 and the quake originated in Totori, the orange section, which indicates a 5. 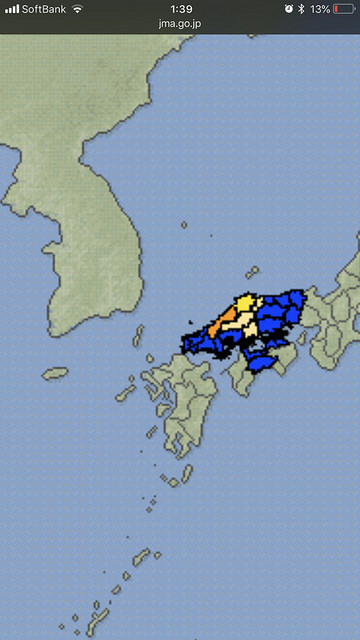