Sunday afternoon we took the kids down to the Yodo River, one of the big rivers running through Osaka into the bay. There are over 300 geocaches along the shores of the river and people come from all over to see how many they can get in a day. We did a loop around both banks of the river and got a bunch, but not close to 300. The sun was out and despite the cold winds, it was quite pleasant to be outside. The Japanese love baseball and play all year round as you can see by the photo above. I also like to see the large number of bikes at the park. That is one of the reasons the Japanese are so healthy is that they get a lot of exercise, which is a suggestion for Americans to improve their health.

As I have previously written, geocaching is a great excuse to get outdoors, spend time together as a family and explore new areas. The river banks are for public use in Japan and one finds sports fields, golf courses, bike paths, fishing spots, etc. We are passing over the Nagara bridge, just outside the central business district (photo above)

Above are the old locks that carried boats between the Okawa and Yodo rivers. Because of dams and levees to prevent flooding, the two rivers had a large difference in elevation. They are no longer used and city officials have turned them into a sort of outdoor museum.

A highlight for me was crossing this train bridge. The tracks are under construction so no trains are crossing, but Oliver was really frightened to cross, thinking a train would come. There is space on the side and it is safe, so it was a managed risk situation. We made it across with no problems.

Thanks to Josep for driving and Pico and Bernie for helping us find so many geocaches! 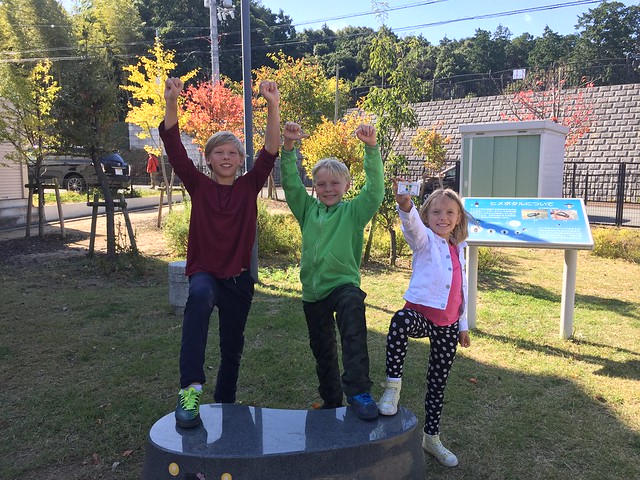 A historic moment in the Kralovec family: our first geocache! We joined the world of geocaching this weekend. It is such a good family activity because it is outside, something we can all do together and it gets the kids away from the computer or TV. I highly recommend it. In our neighborhood of Minoh, there were three geocaches within a mile of our home. We found two of the three. The geocaches are small, about the size of a box of tic-tacs, with a log to write your name and date. With mobile phone technology, you can read about other people’s experiences and they also post photos if you are really stuck. There is a hint provided as well. My children were very enthusiastic and we rode our bikes to the three sites. The beautiful autumn weather continues.

It was a nice family weekend. Owen played his first basketball games of the season. His team won both games quite easily. I have been thinking a lot about capturing the special small moments of family life. It seems life goes by so quickly and by stopping to document or note those special, not milestone moments, it gives you a chance to relive them. They would otherwise just pass by. Anyway, Ocean bought a pair of plastic glasses at Daiso, her favorite store in Japan. They came with a big nose and mustache. She took the nose/mustache off and was following me around the house, saying she looked like me. I snapped this photo below. Ocean is so loving, smart and has such a sparkling, positive personality. I feel so blessed to be able to raise a daughter. 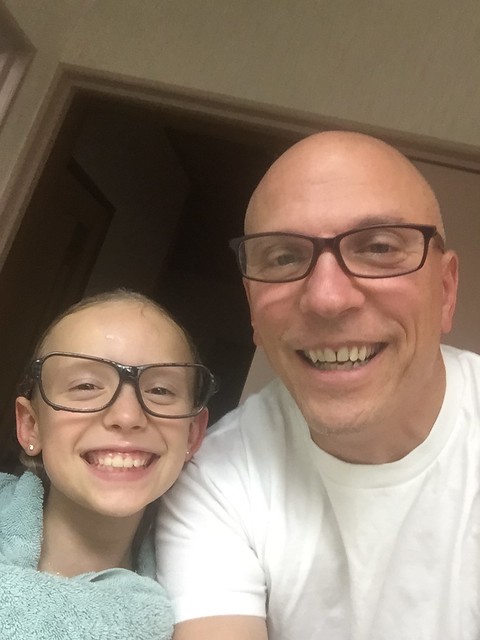