Owen, Oliver, Kenta and I went to yesterday’s Hanshin Tigers versus Soft Bank (Fukuoka) Hawks Nippon Professional Baseball league game at Koshien Stadium. In a pitchers’ duel, the Hawks defeated the Tigers 1-0. Kodai Senga pitched 8 scoreless innings to improve his record to 7-0 in 12 appearances. Soft Bank, the biggest cell phone and internet company in Japan, really does a good job in baseball operations and has far and away, the best team and organization in the league. They are 44-17 this year to be atop the Pacific League and have won the Japan Series the past two years. Senga is one of many excellent pitchers for the Hawks. They originally were based in Osaka and were owned by a railway company before being purchased by a department store in 1988 and moving to the southern city of Fukuoka. 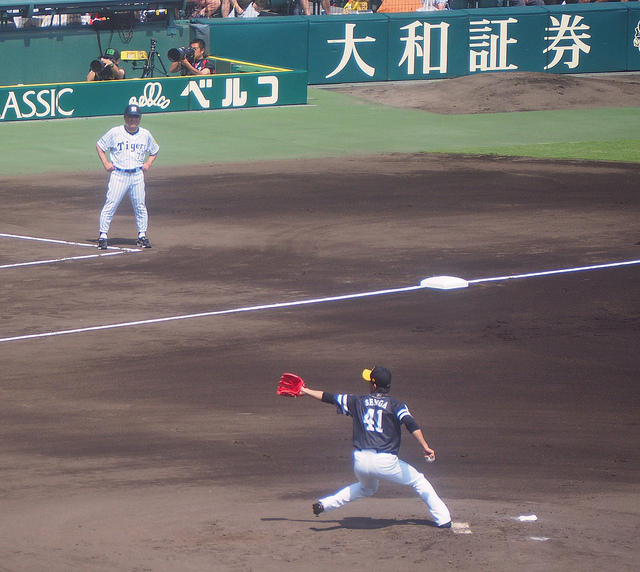 The Hawks had great pitching from Randy Messenger, the 6-6, 265 American import. He played for the Florida Marlins, San Francisco Giants and Seattle Mariners in his 4-year MLB career. Messenger has played for the Tigers for 7 seasons and is their ace, despite being sent to the minors briefly last year. Messenger pitched 8 strong innings and the Hawks scored the only run in typical fashion in the third inning. After a leadoff hit, a sacrifice bunt moved the runner to second. They love sacrifice bunting here. Senga got a hit to move the runner to third and then a suicide squeeze bunt play brought the runner home. Messenger also had one of the 4 Tigers’ hits and deserved a better fate.

On Monday we went to see the Hanshin Tigers to host the Chunichi Dragons. The Dragons won 9-2, and the 44 year old player-coach for the Dragons, was 4-4 with a home run and double to lead them to victory. Both teams are around the .500 mark, being fourth and fifth in the standings respectively.

It was a fascinating afternoon to experience the differences between baseball in Japan compared to the USA, especially the stadium experience.In the USA, most people go to baseball games for day or night out and many times the game is secondary to the food, the music, the attractions at the park, the in-between inning entertainment etc. The crowd is also much more subdued in the USA. In Japan, I think people go to let off steam and shout and sing. There is much more noise and group singing here in the games. It is a tradition in many Japanese games to have spectators release balloons during the seventh inning stretch and it is as enjoyable for kids as singing “Take Me Out to the Ball Game”. 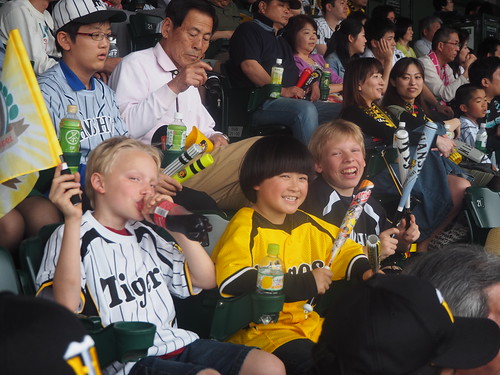 Koshien Stadium is the most famous ball park in Japan. It is 80 years old this year and is one of the few outdoor stadiums, as most of the teams play in domes. It rains a lot in Japan so I see why they do this. Koshien also has a totally dirt infield and real grass in the outfield, rare for Japan as well. It also hosts the high school baseball national championship tournament, which is almost as popular as the professional league, every August.

The Tigers are the second most popular team in the league, behind the Yomiuri Giants from Tokyo. They are owned by the same company, Hankyu, that started the school I am working at. The Tigers however, have only won the league only 9 times compared to the Giants 45 titles and they have been compared to the Boston Red Sox while the Giants are the New York Yankees. The Chunichi Dragons, from Nagoya, also have won 9 titles, and with the Hiroshima Carp, are one of the strongest organizations. All of these teams play in the six-team central league. It is a shame that there is only a two week window in June that the central league teams play with the pacific league teams. 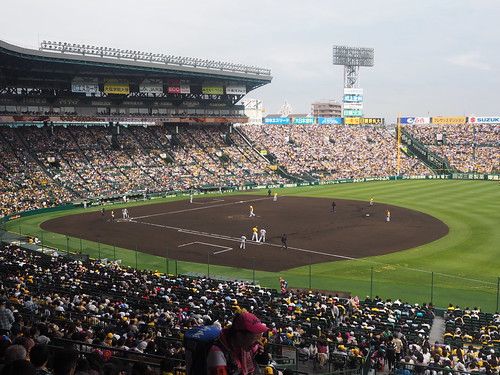 My favorite part of the experience were the songs the best players had. The Tigers have an official song writer and when a player comes up to bat, the crowd sings a particular song written just for that player. Only the veteran or best players have personalized songs. They are catchy tunes and the fans know all the words. My favorite was the song for Tsuyoshi Nishioka’s song. I would have loved to have a song written for me, although it must get tiring to hear it during every at bat.

The Hanshin Tigers are one of the big national teams. There is a second team in Kansai, the Orix Buffaloes, who play in the Osaka Dome. Koshien stadium is halfway between Kobe and Osaka and is about the same distance away as the Osaka Dome, which is just south of downtown Osaka, from our home in Minoh. I hope to go to a Buffaloes game, and get a chance to see some of the other Pacific league teams. The Tigers get about 1 million more fans yearly at their games than the Buffaloes. 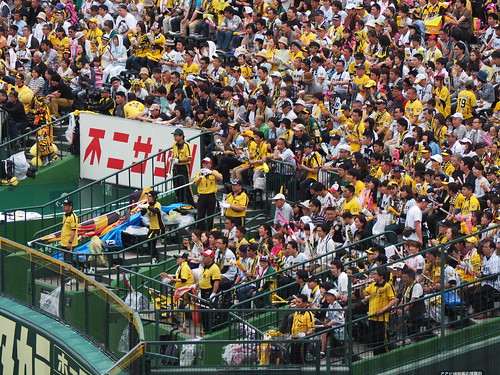 I would like to thank our friend Kenta for inviting us to the game! We are going again Sunday with him to see the Tigers take on the Carp.