We had a short break in our long flight from Santa Cruz, Bolivia to Osaka, Japan. My uncle lives in Studio City California and once again, he was a gracious host as we stayed in Los Angeles for 2 days. It was good to get a good night’s sleep, some delicious home cooked meals, and catching up with family / meeting new family members!

Besides spending time with my uncle, the highlight for the trip to me was a hike in the Santa Monica mountains. Wilacre Park along with a couple of other natural areas in the mountains that are connected, make for a refreshing green break from the hustle of LA traffic. There were a lot of people on the trails, but everyone was in a good mood and quite complimentary to my family. I spotted a hummingbird and a beautiful yellow songbird that I will identify on my nature blog. The trail was well-maintained and despite some overly large homes encroaching on the limits of the park, it was a pleasant nature experience. This area is separate from our previous hike near the Griffiths Observatory that we did last month on our way through. The Wilacre trail would make a fantastic run because of the gently rolling hills and views to the city. LA surprisingly has a lot of nature reserves due to the proximity of mountains and it is quite easy to get into forest, in the middle of a large metropolitan area.

I read a good article about the Los Angeles River in the Sunday LA Times. The river is 51 miles long and during LA’s development of the 1940s, the army corps of engineer filled the river with thick concrete. They did this so during a rain storm, the city would not flood and the stormwater would safely be sent out to sea. It served its purpose of allowing the city to grow, but it is quite an eyesore when it is not filled with storm water. City officials are trying to figure out how to make it a place to for the citizens to enjoy. Today it is off limits, but it is not realistic to remove the cement and make it green. I don’t know what they will do, but I am glad they are thinking about it. In the parts I saw, the river itself is off-limits and there was only a small flow of treated wastewater. Some of the river had a nice walking trail with artwork and some planting, but it is in contrast to the metal chain-link fence and barbed wire. I will be curious to see what they come up with as they commissioned a famous designer to work with NGOs to make a proposal.

It was quite evident to us that LA is the center of movies and television. While on the hike, five planes skywrote “COMPTON” to promote the new film, “Straight Out of Compton”. There were also numerous billboards and small studios all over the city. The city is also the center of the pornography industry, and some of the studios looked a bit dodgy.

We had a nice Thai meal last night. One interesting observation is the contrast between neighborhoods and even blocks. Some like Studio City are really nice with expensive homes and classy restaurants. Then there are other areas with pawn shops, liquor stores and dilapidated buildings on the next block.

LA has a lot to offer and we really enjoyed our two visits this summer. I would love to come back and see more. I don’t think I would want to live here because of the high cost of housing and traffic. It really is a city of large income disparity and it needs more government intervention to make the city more livable and equitable. They could start with some serious public transportation infrastructure and some serious downsizing of homes and cars, which is much harder to do.

I would like to thank Uncle Jack for hosting and helping us! We love you! 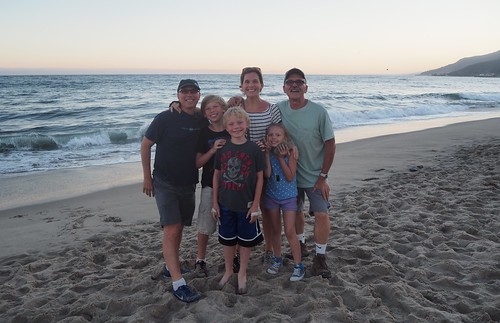 An end to a perfect day at the Santa Monica beaches.

I am writing this on the plane leaving LA after a relaxing and enjoyable 4 days stay. Our host, my uncle Jack, was the ideal host and gave us the royal treatment. He showed us the best of LA and we had a worry-free visit. Thank you!

Getting to know new places is one of my favorite things to do, more so when I can do it with my family. Los Angeles is one of the great world cities and LA and California are distinctive parts of American culture and could easily be a country of its own. I think we saw a lot and did many of the southern California activities, from swimming in Santa Monica to hiking in Griffith Park, to cruising through Beverly Hills, to give our family a good understanding of the city.

Below are my impressions:

• Southern California is the desert. They are also in the midst of a multi-year drought and residents have been asked to reduce their water use by 25%. I read a lot about the aqueducts that bring water to the city. Most of California’s water however, is used for agriculture and there are no reductions in that use yet. California is one of the most prolific fruit, nut and vegetable growing areas in the world, due much in part irrigation schemes. They will have to come up with ways to use water more efficiently. We felt the drought more outside the city and our hike through the Hollywood hills was quite dusty.
• There are a lot of free spirits and “riffraff” in LA. We saw many characters and scruffy, unkempt people. After being in Japan, it was a bit shocking to see the individuality and diversity of people.
• As in most cities throughout the world, if you are wealthy they are great, but if you are middle class, it is better to live in a smaller city or town in my opinion. The real estate prices were super high. Beverly Hills reminded me of our neighborhood of Dedenje in Belgrade. As soon as we crossed the line, ivy covered walls and tall palm trees gave it a peaceful look. There were many really large homes and Rodeo Drive is the main shopping district for the them. There is a lot of money in LA, but it is obviously not distributed evenly and I feel sorry for the underclass and lower middle class trying to make ends meet. We stayed in the suburb of Studio City, which is upper middle class and really didn’t see any of the poorer areas. 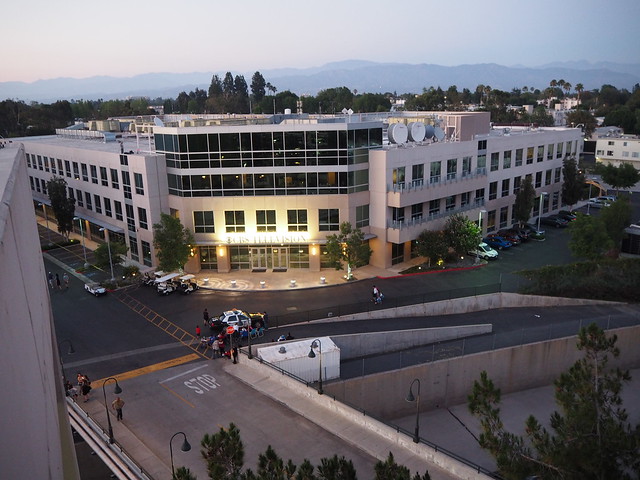 The view from the rooftop of CBS Studios – Studio City, California
• Sitting on top parking lot of CBS Studios, listening to the Beach Boys and watching the fire works was a very California experience. The many billboards advertising new television shows was another sign that the main industry of LA is television and movies. LA has been a driving force of spreading American culture over the world. We didn’t run into any actors or celebrities.
• We went to two beaches (Ventura and Santa Monica) and both times the water was cold. The currents off California come down from Alaska and the water does not warm up until August.
• The Mediterranean climate is the best overall weather. The bright sunny days with that extraordinary light, the cool nights, and mild, rainy winters are nice to live in. The winters are fresh and not too cold and the summer days are hot but not humid. Los Angelinos were complaining about the humidity our first couple of days there, but we didn’t feel it coming from humid Japan. I lived in Perth, Australia for two years with the same climate and loved it. The hills, pines and yellow sands and rocks reminded me of Spain and Cyprus. It is my ideal climate to live in. 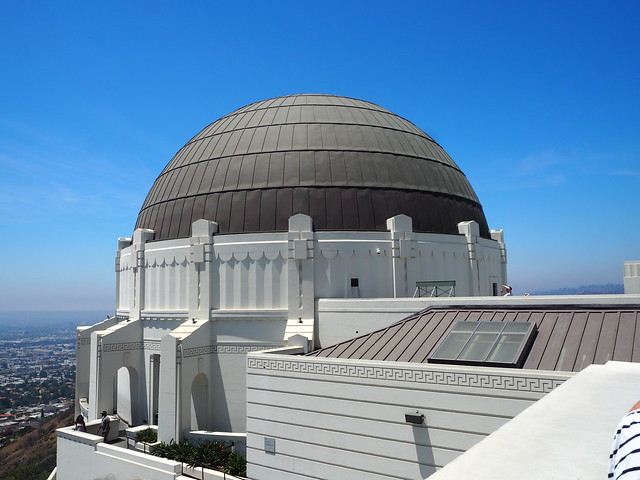 The main dome of the beautifully designed Griffith Observatory.

• The Griffith Observatory is definitely worth visiting! We attended the planetarium show and it was truly inspiring. It made me want to study astronomy and to look up at the night sky. I really do love science and hope I can pass my passion to my children. There were many exhibits in the museum and despite the crowds, it was informative and one could have a good experience. I would like to go back again. 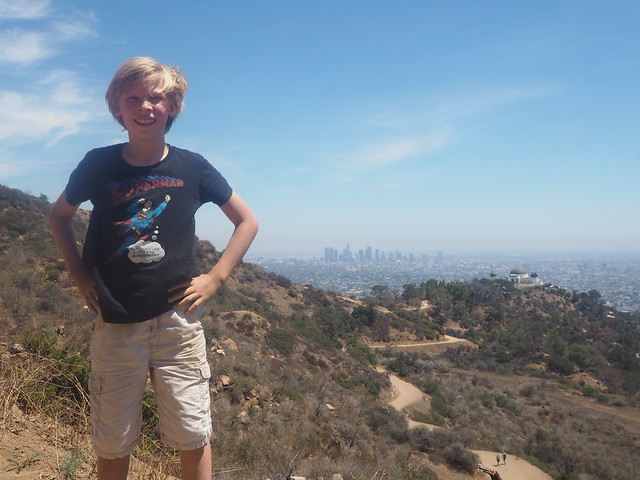 Owen above the Griffith Observatory with LA in the background.

The best thing about the observatory is its location. After looking at the exhibits, we went for a long hike up the mountain. The views over Los Angeles were spectacular. The kids and Nadia were good natured to go with Jack and I. You could really feel the drought on the walk. The trails were extremely dusty. We didn’t see much wildlife and I didn’t take time to identify any of the local trees. During our visit however, we did see many eucalypts, California palms, date palms,

• I didn’t know that Scientology started in Hollywood. We drove by the world headquarters.

• Nadia was excited to see the hand and foot prints of the movie stars at the Chinese Theatre. We went to the epicenter of movies, Hollywood Boulevard. It had the feel of Times Square with the crowds of people. The area was a bit seedy with bars, hustlers and other assorted characters.
• In experiencing the crazy amount of traffic and large highways, it gave me a feeling of sadness. To have so much time wasted and everyone in their own little isolated capsule, wanting to be somewhere else while stuck in line…Although Los Angeles has its pleasures and attractions, unless I was loaded with money, there are better places to live. The stark contrast between rich and poor is disturbing to see. I do want to come back and visit again. I really want to see some other parts of the state like Death Valley, Palm Springs, Yosemite, and small town northern California. 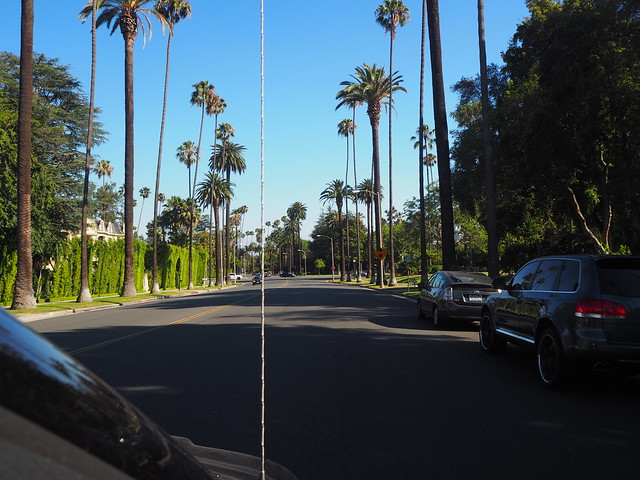 A street scene in Beverly Hills 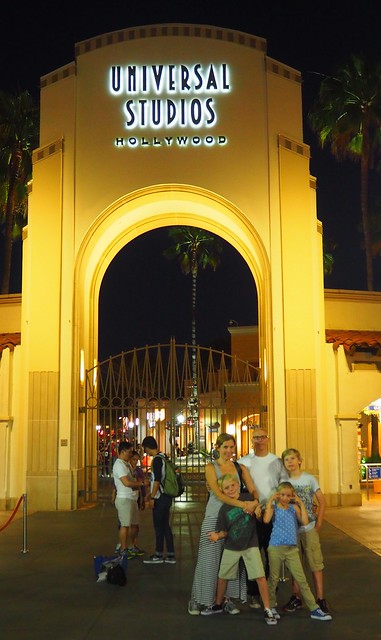 Posing in front of the Universal Studios Hollywood gate

After a long flight over the Pacific, we arrived at LAX on a hot sunny Tuesday afternoon. We are staying in the San Fernando Valley suburb of Studio City in greater Los Angeles for a couple of days before heading to Bolivia. My uncle lives near Universal Studios, so in trying to stay awake we went out to dinner and soaked up some of the atmosphere. As you may have read in a previous blog post, I had horrible experience at Universal Studios Japan because of the immense crowds. It was nice to see the original theme park in Hollywood. We didn’t go inside, and at $100 per person, I don’t think it is worth it. Since Comcast bought NBCUniversal, the park has turned its finances around with 6.1 million visitors in 2013 and over 1.3 billion dollars in revenue at the Florida/California parks. 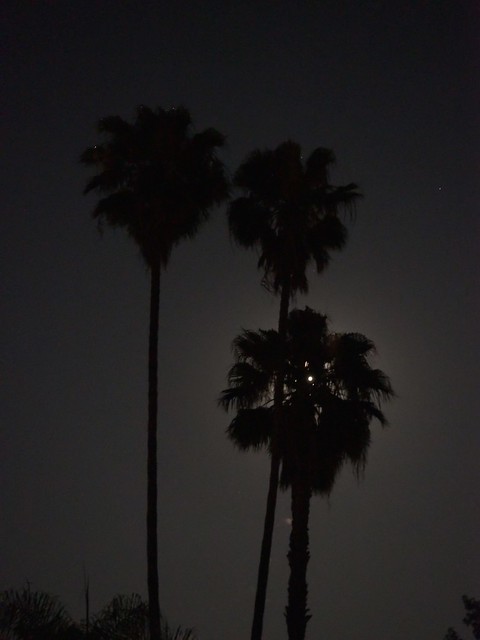 California reminds of Spain and Cyprus, a typical Mediterranean climate. The state is going through a multi-year drought and it did look very dry from the airplane. Water rationing is in full force for the people of LA, and we needed to take short showers and not rinse dishes before putting them into the dishwasher. Big fees are given to heavy water users and all consumers were asked to cut their water use by 25%. California agriculture however, uses most of the water and the “world’s garden” may need to come to terms to using so much water. Above is a photo I took tonight of the moon behind some palm trees. LA is known for its palms, but there is only 1 species of palm native to here.

We are looking forward to exploring one of the world’s great cities some more in the next few days.