During the fall break we took a few days to visit the prefecture of Tottori and the Daisen-Oki national park. It is my favorite place in Japan (so far) and it was our second visit to the area. We went with two other families from the school community. The kids had a blast, and the adults too!

The highlight for me was the hike on Tuesday. We walked to the 1,709  (5,608 feet) meter high Misen Peak, in the Mount Daisen National Park. Despite fog, rain and cold winds, I had a wonderful day with my family and friends. Much of the pleasure of the hike was taken away by the clouds and fog obscuring the spectacular views to the nearby Sea of Japan. It was made up for me by spending the day outdoors and with my family. Highlights included walking through the gloomy beech forests near the town, with the falling leaves and then leaving the forest past the tree line to the summit. The winds whipping up the face of the mountain and going over at low points on the ridge were amazing to walk through! They were interspersed by quiet areas protected by rocks and bushes. It was a difficult hike with rocky steps mostly going straight up for the 6 miles up and down the trail. Nadia and the rest of the mothers and children made it to the turnaround point, close to the end of the beech forest. Owen and I and the three others went on from there to make the summit. The next day we saw snow on the mountain, so overnight, the icy winds and rain must have turned to snow, shortly after we left the summit. It was about 3 hours walk up and 2 hours walk back. The hot bath at our pension was just what the doctor ordered upon return, and a 2 hour nap!

photo – Although it Daisen looks like Michigan, you don’t get Buddhist shrines in the forest like in Japan.

Daisen mountain has that classic volcano look from the west, but it has not erupted for the past 10,000 years. It has long been the center of worship, with the Daisen-ji temple founded almost 1,300 years ago. Shugendo, an ancient Japanese religion adapting shinto, taoism, buddhism and other beliefs, is practiced here. Adherents seek awakening through understanding the relationship between humans and nature and practitioners do this through denying themselves worldly pleasures and spending a lot of time on the mountain.

photo – The kids heading up the stairs of the Daisen-ji temple.

It is pretty close to Osaka (2-4 hours) and is a relatively remote, unpopulated part of Japan. The area around the mountain reminds me of the Upper Peninsula of Michigan, so that might be one of the reasons why I love going there.

On the other side of the prefecture(state) are the Tottori sand dunes, which we visited the day before. Kids love them! It made for a perfect sunny afternoon. The weather was so nice that a couple of us even went for a swim. The huge dunes were a blast to climb up and sprint down. The crashing waves of the sea were relaxing. It might have been our last warm day of the season, as it is getting cold with the onset of winter.

The dunes were shaped by winds bringing sand up from the sea. Over 100,000 years of this formed the only large dunes in Japan. Since World War II however, they have been shrinking due to a government reforestation program and tsunami walls further up the coast, changing wind patterns. Today they are 16 kilometers long and 2 kilometers wide. 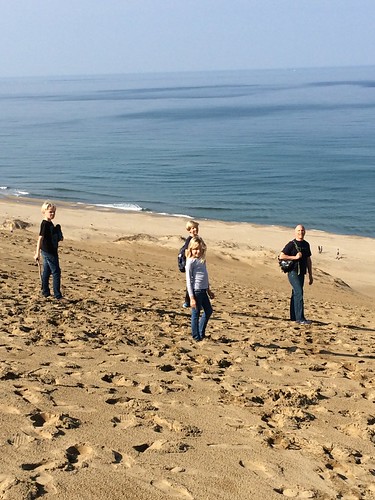 On the way home from Daisen, we stopped at the Tottori sand dunes for the day. The audible gasp from the kids when we walked over the hill and saw the dunes for the first time was worth the trip. The dunes are located just outside the city of Tottori and run along the coast for several kilometers. We had a lot of fun running up and down the hills and with temperatures in the 70s, I even went for a swim, my first in the Sea of Japan. 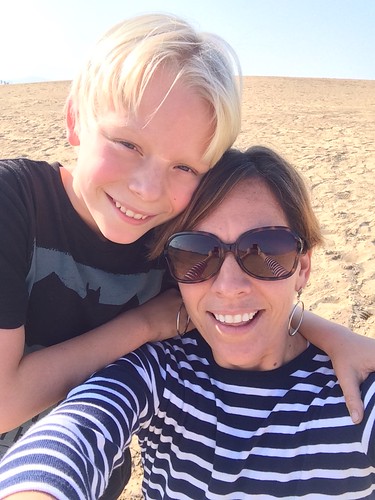 There were a lot of people there, but it didn’t feel crowded. All one had to do is walk a short way to get some privacy. Most of the tourists stopped for photos with the camels near the road and then walked up the nearest dune. It would have been nice to have a picnic lunch and walk to another part of the dunes away from everyone. The size of the dunes is impressive and despite the fact they are shrinking, they still attract a lot of tourists. We were the only non-Japanese tourists in the mountains and at the dunes. This area is really off the beaten track for foreigners. Below is a video from the day.