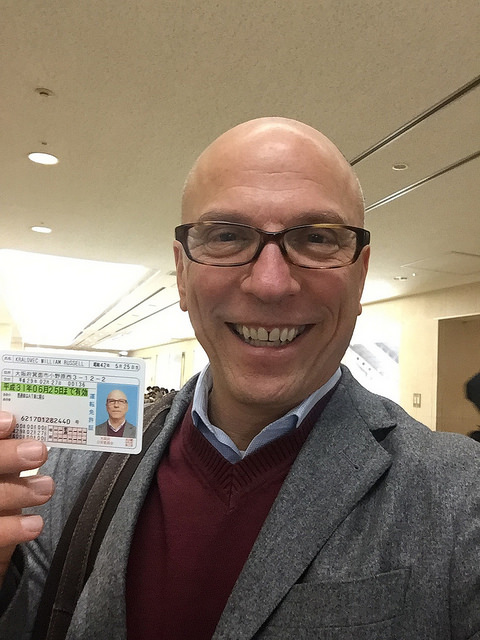 The size of my smile is in direct correlation to the amount of time and stress that went into obtaining my Japan driver license! It was quite the ordeal. In all the countries I lived in, it was always some simple paperwork or an international driving permit would suffice. In Japan, after one year, residents need to obtain a Japanese license.

My first challenge was paperwork. I renewed my Michigan license 46 days before arriving to Japan. The rule states I need to prove I drove 90 days as a licensed driver in the USA. I had to send for my complete driving record from the State of Michigan Secretary of State, showing I received my first license on June 6, 1983, one week after my 16th birthday. I also needed to supply original diplomas of university as evidence I lived in the USA for at least 90 days after June 6, 1983.

The second challenge was the eye test and written test. This was pretty straight forward process and after reading through the Japan Automobile Association book, I scored 8 of 10 on the quiz, needing 7 of 10 to pass. The forms and all information is kindly translated to English, which is nice of the driving center.

The final part is the driving test. The driving center for northern Osaka is located in the suburb of Kadoma, which is about an hour away by public transport from our part of Osaka. This is an industrial area close to the Panasonic plant and headquarters.  There is a large administrative building and driving course as you can see in the photo above. The test is only about 5 minutes long, but one needs to do everything right. Things like checking under the car before entering the car, checking mirrors, pumping the brakes, looking both ways, etc. One tiny mistake can result in failure. The average amount of attempts it takes to pass the test is 2.7 according to informal research conducted by the English teachers association of Japan. It is hilarious that adults are treated like beginners and actually fail a simple driving test. I rented out the course for an hour on a Saturday to practice so I felt confident, but I was extremely nervous.

I failed the first time. I think the instructor wanted to pass me but the bumper of the car hit one of the yellow poles you see in the photo. It was in the “crank turn” section of the course, almost near the end. The other driver in the car with me also failed by driving over a curb on the “s-curve” portion so I didn’t feel so bad. On the second attempt, I passed! I did have to stop and back up twice in the turning sections. The instructor only criticized my hands while turning, they needed to stay on the wheel more.

In reflecting upon the experience, I think the experience made me more aware of pedestrians and cyclists which is good. There are lots of people in the streets in Japan and as a cyclist myself, want drivers to be aware of us. Still over 400 cyclists/pedestrians are killed by getting hit by cars in Japan. That is a tragedy that people and the media do not talk about much. Self-driving cars can’t come fast enough in my opinion! I was annoyed at the silliness of the paperwork, especially providing evidence that a 49 year old man drove for 90 days in the country of his passport. The Kadoma driving center is such an odd place. It is a doctoral study in sociology waiting to happen. Japanese drivers face the same amount of testing and paperwork as foreigners. The culture here dictates complicated forms and procedures for just about anything, from purchasing a cell phone to exchanging money.

Obtaining a local driving license is a rite of passage for expatriates here. I would like to thank my wife for urging (not nagging) me to get this done. I am also thankful for the support of Ritsu and Art. They spent their time on me and gave me many helpful suggestions. I will be forever grateful! I am proud of my accomplishment and feel so relieved to be a legal driver again! I am looking forward to getting out to the best parts of Kansai and Japan.