Hiroshima is one of my favorite cities in Japan. It is the perfect size for a city, about 1 million people. Osaka, the city I live in, is a bit too big, but our suburb of Minoh is really nice. Hiroshima also is beautiful, surrounded by mountains and it has wider streets than most Japanese cities. This is my fourth visit to the city, twice for school business and twice with my family. Because of the history here, the beauty and the proximity to Osaka, it is an easy place to take guests and give them a taste of a different part of Japan. My uncle is visiting this week, our last of summer holidays, so we took drove the 4 hours from Osaka to Hiroshima this morning.

71 years ago Monday, US forces dropped “Little Boy” above what is now the Peace Memorial Park. Going through the museum is always emotional for me. Reading the stories and seeing the photos of the children killed by the blast is tough, especially as a father. Not only the 140,000 people dead is a tragedy, but the families of the 140,000 that survived. As I’ve written in the past, every world leader should come and visit the memorial. Hopefully, it will make them consider more the human toll behind ordering bombings. Today is the anniversary of the Nagasaki bombing, a city I hope to visit before leaving Japan and one that does not get recognized enough for what it suffered. 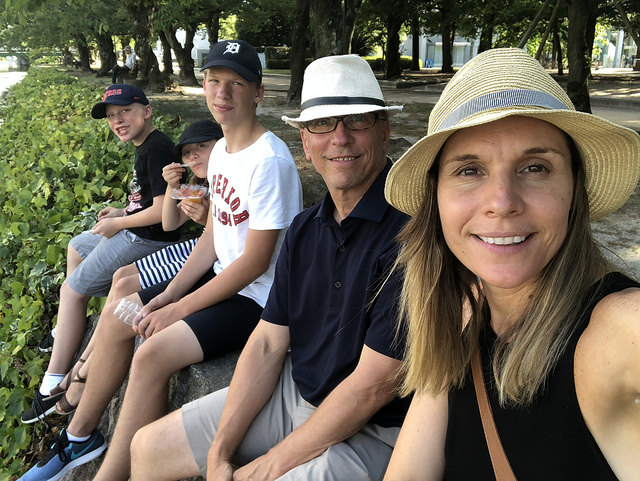 It was so pleasant in the late afternoon sitting along the Motoyasu River that we spent several hours, just watching the river under the trees. That is one good thing to come from the nuclear bomb, a beautiful green park in the center of the city. Our relaxation came to an abrupt end when an unnamed member of our family (perhaps my spouse) dropped my iPhone 8+ into the river. Oliver climbed down the embankment and retrieved it in about a foot of water. We learned that the iPhone 8 is water resistant and when dropped in water for under 30 minutes and less than 1 meter, it should be OK, which so far, my phone has been fine.

We are staying in an Air BnB apartment near the park. Nadia and I went for a drink at a local sports bar and watched the extra innings of the first place Hiroshima Carp against the Chunichi Dragons. The patrons were totally into the game and it was fun to watch the outcome of a replay challenge of a close play at first base.