We had a special day on Wednesday to mark the ninth anniversary of Oliver’s birth. He invited four friends over for a Nerf gun extravaganza! There were bullets flying all over the house and the kids had a great time. A highlight was the weekly radio check to the US Marines at the embassy. We walked to Ollie’s favorite restaurant, Quan Du Je, in Senjak. It is a nice thing about Serbia is that they love kids and chaos, so no one was bothered by the boys chasing each other and being loud in the restaurant.

We finished the night by watching World War Z and reading a bit of the Zombie Apocalypse Handbook. It was a total boy’s party. Another interesting moment was the candle explosion during singing Srećan Rođendan (Serbian Happy Birthday) and you can see the video here. 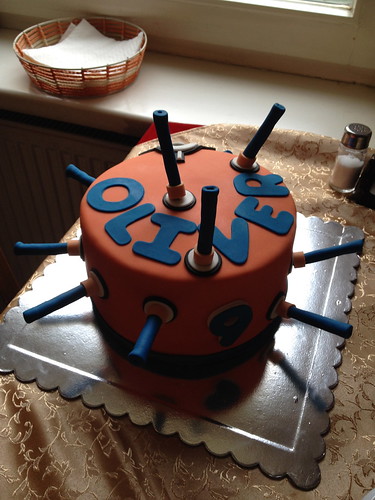 Monday we celebrated Ocean’s fourth birthday as a family. She had a party at school and then we had a small celebration at home. I didn’t go back into work after returning from Vilnius that day and spent a bit of extra time with her. She had a great day and loved her presents. The kids are into legos right now, so most of the gifts had something you could build with. She also got a couple of Barbie ponies.

It is amazing how fast she is growing up. When we first came to Belgrade, she was just a baby. Now she is going to school and is such a sweet little girl.

Of course Oliver had to pull the jealous brother routine as you can see from the photo below. Congratulations to Ocean and Mama!

Nadia turned 33 yesterday and we celebrated by going to the Dačo Restaurant. We shared the celebration with some friends. Dačo is a unique restaurant featuring homemade Serbian food. It has the cozy atmosphere of a Serbian village and heaping portions of delicious food. My favorite last night were the plum sauce on pork, kajmak with proscuitto on hot lepinja bread, and this bean dish. I highly recommend the restaurant! It is located in a working class neighborhood near the Pancevo Most. Strange to have this place surrounded by communist-era apartments.

We laughed a lot and ate well. Nadia looked beautiful and is getting more beautiful and interesting as the years go by. She paide homage to her homeland of Australia, and baked Anzac biscuits for everyone to celebrate also, Australia Day, which also happens to be ont eh 26th of January. Happy 33rd baby, I love you!

With the rush of the end of the semester this past week, I didn’t have time to do a blog post on Owen’s birthday. He turned seven last Sunday and in honor of the occasion, we invited some of his close friends for a day at the Usče Mall here in Belgrade. It was the hyper mega Usce day with five hours of fun. We did it all, with bowling, dance competition, playland, food court, and movie. Owen and this friends loved it.

For posterity, Matija had the high bowling score of 97. Riana had the high on the other lane of 79. Owen bowled a 60 and Oliver bowled a 64. We watched the movie, Planet 51 dubbed in Serbian. The winners of the dance competition were the employees of the bowling center and the crowd gathered around watching. Very talented and entertaining kids.

I can’t believe it has been seven years since the birth of Owen. He is growing up too fast!!!! Happy birthday big boy, we love you.

Below is a short video of Oliver dancing. The boy has some moves and tons of charisma and charm.

This is the big 4th of July weekend in the USA. Ocean and Ollie are shown above in Grandpa’s garage on the John Deere riding lawnmower. Ocean’s looks are changing every day! I spent the morning with these two as Nadia and Owen went for a run on the Appple Blossom Trail. I took them in the wagon over to the Caspian Community Center playground. In the afternoon we headed over to my brother’s home in Iron Mountain. Shelly was putting on my nephew’s birthday party. She rented a bouncy castle and they set up the swimming pool. Despite the cold water and cooler temps, the kids and I enjoyed swimming. The highlight of the party was the neighbors lighting the smoke stack across the street. There is a 50-meter smoke stack ear Jim’s house that was left by the mining companies. There were many iron mines in the area in the early part of last century. It was known at the Menominee Range and millions of tons of iron ore were shipped to Chicago and Detroit from here. Today all that are left are museums, open pits that have turned into lakes, and huge underground caverns and shafts that are largely unexplored and occasionally cave in. This was an era before the Environmental Protection Agency forced mining companies to clean up and restore the landscape when they were finished.

Anyway, unknown persons lit tires in the bottom of the unused smokestack in honor of a relative who passed away this week. He used to do this occasionally on the 4th. A while later, the Iron Mountain City fire truck came and put it out. I think it was unneccesary as it was not a fire hazard and only causing a bit of pollution. The police asked us who did it and we said we didn’t see anyone lighting it (true).

Owen slept over his cousin’s house and we took his little brother Beau.

Above is the video of us singing happy birthday to Oliver and him blowing out the candles. You can scroll down to read the previous two posts about Oliver’s birthday.

Yesterday we held Oliver’s birthday party because the May Day holiday. We invited some friends of ours and their children to come and celebrate Ollie’s big day. The kids, shown above, had a wonderful time, running around, laughing, and screaming and mostly leaving the adults alone for us to enjoy ourselves too. Our pergola is the perfect place to host parties, where both children and adults can have a good time. The name pergola is a bit pretentious, but it is the proper term to describe our back gazebo/patio set up in our yard. We have the incredible vine that has been trained to grow over the lattice and it really is our summer house. We spend as much time out there as we do inside the house during good weather. That is a nice thing about Belgrade, is that the spring and fall is warm and long. We use the pergola from August – mid-November and then again from mid-March to June. We are on holiday and outside the country in July.

We were concerned in the morning because it was cool and cloudy. I spent most of the day cutting the lawn, trimming the vines on the pergola, sweeping, preparing the grill, and getting the drinks ready for the party.  The sun came out later in the day and by the time the party began at 4:00 PM, the day was beautiful. It did cool down later in the evening and we all went in to watch the kids dance party. The main course was of course the Serbian specialty, a BBQ. I prepared “pljekavica” as well as chicken shish kebabs wrapped in bacon. Nadia made a cake for Oliver’s birthday and a dessert for the adults which was a delicious strawberry truffle the kids then enjoyed ice cream cones .

Oliver received two toy motorcycles, one from our nanny Vera. He also got a water gun and a nice book, “We’re Going On a Bear Hunt.” He laughed and had a fantastic time, being the complete wildman he is. Right before the party, true to form, Oliver fell when Owen was chasing him with water balloons. Oliver had a big bump right in the middle of his forehead. We used to call him unicorn boy because of this and it was appropriate that he did this on his special day. He is such a little character and talks to everyone.

It was nice to have a Serbian touch to the day and Owen’s teacher Verica sang Srećan Rođendan (Happy Birthday). We were laughing at the kids trilingualism, Spanish-Serbian-English. Nadia and I were exhausted at the end of the evening. The party didn’t end until around 9:00 PM.

It was a good day had by all! Happy Birthday Ollie – We Love You!!!! To see more photos of the evening, please check out my flickr.com account.

Oliver turned four years old yesterday. We are having a party today, May 1, as it is a national holiday in Serbia. I’ll be posting photos later.

The collage shows Ollie in his three significant places. The first, starting from the upper left and going clockwise, shows Nadia holding Oliver outside our home in Venezuela. Oliver is then shown mowing the grass in our former home in Iron Mountain, Michigan. Lower right shows him climbing rocks in the Mesa area of central Anzoategui, Venezuela and finally, it shows him in the swamp at our former family country house in Bolivia.

We get invited to many birthday parties from the classmates of our children. We rarely go because with our hectic schedules, when we get some time away from school, we prefer to be alone as a family.

We made an exception Sunday as you can see above. The Serbs really know how to throw a party! Serbia is a south Slavic nation and has more in common with southern Europe lifestyles, than northern Europe lifestyles. They emphasize good times and family and there is more disorganization like Spain and Italy, than say Austria or Switzerland. That is a big generalization and it is not a comment on the entire population, but that is the trend I have observed.

The party was at a place called “The Jungle” and there are many childrens’ birthday party places in Belgrade. The children above are watching a magician on stage. See if you can spot Owen!

The hosts care as much as the comfort of the adults as children. There were probably 60 adults at the party and about 50 children. As you can see above, there is a nice cafe/banquet style seating for adults behind the children. The hosts had a really nice buffet and an open bar. The building was large, with separate rooms for a disco and play land.

The Jungle provided supervision for the children in the playland and did music activities with them in the disco. Quite an operation, that makes it easy for parents to hold a party. The downside I imagine would be cost, as I saw plenty of bottles of wine and food being consumed. Overall we had a nice time. We have a lot in common with the other school families with young children.

Belgrade is known for its night life. This is about as close as I get to the partying scene!

We didn’t have a big party because one year olds don’t deal well with crowds. She also doesn’t have any friends yet, although my colleagues Tim’s girls love her. We did get typical Serbian cake of chocolate mousse and light creme – delicious! As you can see, Ocean enjoyed it also.
She gets cuter by the day and is showing us genuine affection. We successfully weaned her and now we don’t even give her milk at night. She still gets up a couple times a night, but only for a hug from me and then I put her down on her stomach and put the blankets on her to make her cozy. Ocean calls us by name and points her finger and says “no,no,no”.
Grandma Kralovec sends this message to Ocean on her first birthday:
“To Grand daughter number one, who now is one!!
Happy Birthday: