Serbia experienced 4-5 days of heavy, steady rains this week, which caused major flooding of the Sava River. Several small cities along the river, including nearby Obrenovac, were completely flooded by over a meter of water. Several people died and thousands were evacuated. The damage must be enormous, and much livestock died. Flooding also occurred in in Bosnia, even more so than in Serbia. This is the worst flooding in the Balkans in recorded history.

Our good friends from Obrenovac were rescued by our head of security, and he told me a harrowing tale of getting through 1.20 meter deep water at night. The area was sealed off by authorities and people are being evacuated by boats now.

I help organized a flood relief donations drive at our school. I was Administrator-in-Charge and earlier in the week I was dealing with possible closing of school Due to the heavy rains, all Serbian public schools closed by order of the government. We stayed open because almost all of our students live in areas that were away from the flooding and all take private transport. It felt good to help the people of nearby Obrenovac that needed to evacuate. They must be devastated to have that much water go into their homes. It will take a lot of cleaning, and drying out of things.

The past couple of days I took the boys biking along the Sava. In Belgrade the water was high but not flooding. Today city officials were expecting a surge coming from down river as the flood waters recede and go back through to the river. Hundreds of volunteers were filling sandbags and lining them along the river to protect the areas adjacent to the river. I hope their work is sufficient to hold back the water. There are many homes and businesses near the river, and many of the famous splavs and restaurants on the river are flooded and may sustain some damages. As you can see by the pictures and video in this post, it was an anxious ride for Owen and I today. It was heartening to see the many good people helping out strangers and working together to protect areas from the flood.

We have been watching the RTS and B 92 news. I’ll try to keep updated with the progress of the flood and recovery efforts. A lot of work will have to be done with cleaning, repairing, and purchasing of new carpet, appliances, etc. for the people of Obrenovac and other cities. I hope our family can lend a hand in the next few weeks before we leave Serbia. 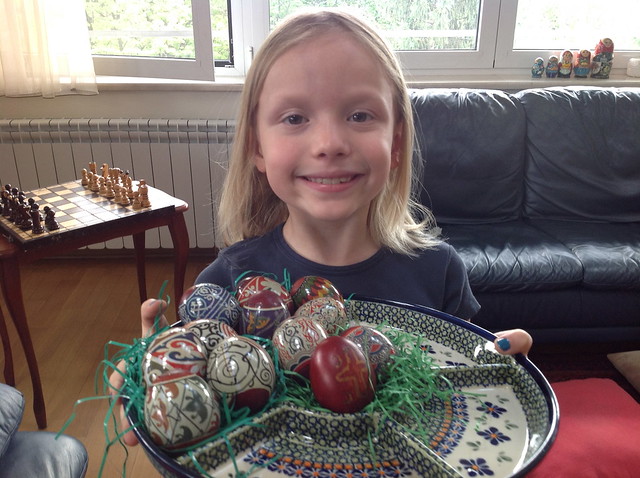 This afternoon we made traditional Serbian Eastern eggs. It was a special occasion today as the Western Christian Easter and the Orthodox Easter fall on the same day. This happens every so often, the next two occasions will be in 2017 and 2025. We went “old school” and got onion skins from the market and boiled the eggs to get the nice red color. If you look closely, I drew a cross and X.B. on the front egg in wax before putting them in the onion dye. X.B. in Cyrillic means “Hristos Vaskrse” (Christ Has Risen). Serbs say this on Easter and one must reply, Vaistinu Vaskrse! (Of course He has Risen!).

We next put on some plastic designs from the company, jaje.rs. They copy designs from Serbian monasteries in the various styles and are very easy to put on the eggs. As you can see below, they are very beautiful. We will do some egg tapping later today and tomorrow, we will complete the Easter celebrations with a chocolate egg hunt.

We are all a bit sad that this will be our last Easter in Serbia, but will definitely pack some more of the jaje.rs monastery designs with us to Japan. 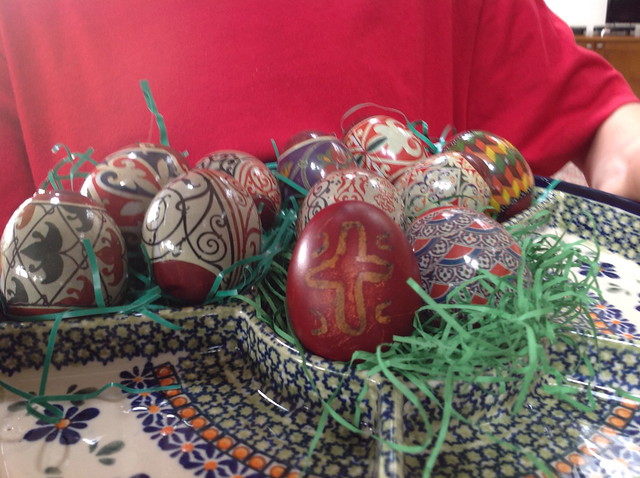 I took a special tour of the Royal Palace this week as part of charity fundraising event. The Princess Katherine’s Foundation is doing a “Children Helping Children” campaign and asked the school to participate. A delegation of our students donated gifts for the impoverished children of Belgrade.

It was an informational and highly interesting tour. I took the photo above of the dome of the church on the palace grounds. Jesus has a bullet hole in his forehead from the Partisans who took over the palace after World War II. The church was used as a storage room at that time and the Royal Family kept some of the artifacts of the history of the place. I especially loved the basement private cinema, which Tito used to watch Westerns back in the day. I sat in his favorite chair.

The tour guide gave us a lot of information about the art works and the history of the rooms in the palace. Currently the Serbian government owns everything, but allows the Royal Family to live in an apartment on the grounds. It is a huge piece of land in Dedinje and the Karadjordjevic Family has refurbished much of the palace. It is quite spectacular and a fascinating place. I highly recommend a visit. The rooms below are done in a Russian style because the family gave refuge to Russian architects and artists fleeing the Bolsheviks. They were allowed to design many rooms. There are also spectacular views and every room has a story.

I also received an invitation to the State Funeral of King Peter, which will take place next month. I’ll definitely blog on the that event. The Royal Family hold no power or political office in Serbia as it is a parliamentary government. We sadly didn’t have time to tour the White Palace on the grounds, but I will definitely come back for that tour.

Čestitam means congratulations in Serbian and last night I celebrated with my friend, the birth of his nephew. In Serbian tradition and medical practice, when a mother goes into labor, the father cannot be in the operating room. In fact, for several days after the birth, only one visitor to the hospital is allowed at a time. This is very different from the US or Latin America where I was in the operating room with my wife.

So what can the father do? In Serbian tradition he throws a raucous party and guests rip a piece of his shirt for good luck and health. A father may go through several shirts in an evening. If any of my readers can tell me the origins of this tradition, why is this done? I guess if you can’t be there, you might as well have a good time and there is no better reason for a party than a birth of a child.

Nemanja in the picture is not actually the father but the uncle, but the party guests got carried away and ripped three of his shirts as well as shirts of his brother-in-law. I had a great time and need to learn some Serbian folk songs. The accordion player was belting out some traditional songs and I recognized many words, “srce” – heart, but I could only dance and not sing like the rest of the party. I wish Americans celebrated like the Serbs do. We don’t get many occasions where everyone is drinking, singing, and dancing with a live accordion player in the apartment! Such a warm feeling of togetherness!

Congratulations to Nemanja and his family! All the best for many more healthy children!

I finally wrapped up shooting for the Montevideo sequel last week. They are filming the final game of the Yugoslavian team. They lost to the host Uruguay in the semifinals of the 1930 World Cup. The game was filmed in the beautiful Pink Studios, a large complex located outside of the Belgrade near the airport. The huge complex has nine sound studios and several Hollywood films have been shot there. The most famous movie being The Raven (2012).

The producers made the stadium, field, and locker rooms in the big #2 sound stage. It is a massive room with the green back drop. It was strange to do my parts without seeing a field or game. I watched the raw footage of the scenes before going into the booth.

It was an incredible experience and I thank all the extras, directors, make-up, costume, cameramen, etc. who helped me get through my scenes.

In a recent article by the Wall Street Journal Serbia ranked number one in the world in cigarettes sold per capita. Serbia topped all countries with 2,861 cigarettes smoked per capita. They defeated fellow Balkan countries Bulgaria (#2 – 2,822) and Greece (#3 2,795). Eastern Europe took the top eight spots with Russia (#4 – 2,786) and Ukraine (#5 2,401) rounding out the top five.

I thought Serbia would rank pretty high because you see (and smell) smokers all the time. The Serbian government last year put the first laws prohibiting smoking in certain areas and it has improved the climate for non-smokers. I always wondered what percentage of Serbs are regular, pack-a-day smokers. I would guess it would be around 1/3.

Why do so many Serbians smoke? One reason is the cheap cost of cigarettes, $2 per pack. There are not many restrictions regarding smoking and the recent laws do not go far enough to put a damper on people’s habits. Although I love that the two big shopping malls in the city are now smoke-free, even the cafes. I don’t feel they went strong enough, with most bars and restaurants, still having large smoking areas alongside non-smoking areas. There is not much in public service announcements as well and smoking is not a taboo, like it is in many western countries.

The Wall Street Journal focuses on Russia’s attempts at lowering the smoking rate. I think the time is right for Serbia to tackle smoking. It must be costing the health care system a lot. It is also ironic that a people that look so good (thin, athletic) and are so active, have such a bad health habit as smoking. I hope they can get Serbia out of first place.

Today my school had a visit from Ivana Maksimovic, who won a silver medal in this summer’s London Olympic Games. She took second in an event called the Women’s 50 Meter Rifle 3 Positions. This was a bit of a surprise accomplishment for the 22 year old as the number one ranked woman finished sixth in the event.

Olympic medals run in the family as her father, Goran, won the gold medal at the 1988 Olympics and competed in four other Olympics. Her mother is a shooting coach also.

She was very friendly and good with the kids. She even brought her medal and all the kids got to hold it. Ivana was patient in answering questions and she signed a lot of autographs.

I asked her how the Serbian Olympic Committee supported her. She said they paid for some of her training expenses and competitions, and she “couldn’t have done it without them.” She did, however, mention that she had to go to Novi Sad to find a range for the event she won a medal in.

It was great she could come by the school and I was happy for Serbia to get another medal at the Olympics. We’ll she how she does at the 2016 Olympics in Rio. After watching all the Olympics this summer, my kids were thrilled to hold the medal and to meet a real Olympian.