For the second consecutive summer I am studying here at Lehigh University in Bethlehem, Pennsylvania, USA. It is better this year to have my family with me! I love seeing Nadia and the kids when I get back from my classes. The class I am taking has been very stimulating and it is nice to spend time with family. I really love the atmosphere of a university town and the Lehigh Valley in particular. 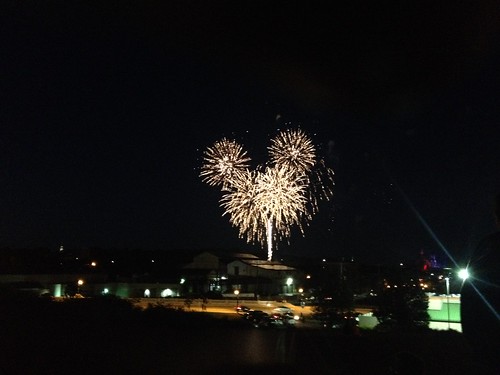 We were here for the 4th of July celebrations although we kept it low key. We did watch the fireworks display in Bethlehem and say Happy 238 Years to the USA. We also went to the Kutztown Folk Festival in Kutztown, Pennsylvania. This is the heart of Pennsylvania Dutch (German settlers to the USA) and Mennonite/Amish country in eastern Pennsylvania. The festival celebrates farm life (agriculture/livestock) and the “olden” days of America settlement. The kids watched a sheep shearing demonstration, saw many old engines for pumping water, sawing wood, husking corn, etc. I read to them a couple of books in Laura Ingalls Wilder series, and we particularly liked Little House in the Big Woods which is set in 1870s Wisconsin. I highly recommend the series for children and to see the stories come alive for them at the festival was really interesting. We also had some old fashioned kettle corn and sasparilla root beer.

One impression of the USA is the amount of space here for everyone compared to Europe. There is a lot of land for not that many people! As you can see below, the sports facilities of Lehigh University, which can be used by the public, are immense. I can just see the sports fanatical Serbs going crazy here with all this room to move. Nadia runs the cross country loop on the grounds while the kids play soccer. 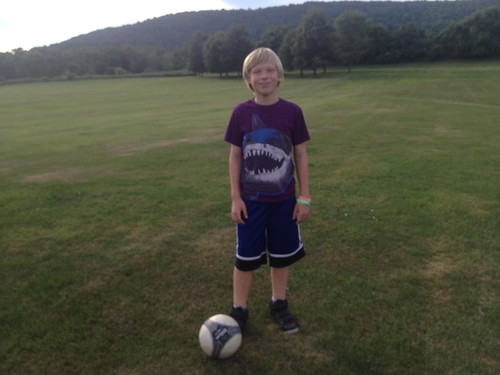 I had an interesting Independence Day celebration here in south eastern Pennsylvania, the heart of the Pennsylvania Dutch cultural region. The Pennsylvania Dutch were immigrants from Switzerland, Germany, and the Czech Republic who settled this area in the 17th and 18th centuries. They were seeking religious freedom, as many American immigrants. Over 300 years later, Pennsylvanians still affiliate with this culture, but most has been lost through the generations of American life and modern influences.

I attended the Kutztown Folk Festival, a celebration of values of these settlers. The Pennsylvanian Dutch are still evident today in the Amish settlements here, as well as private church affiliated universities like Moravian College. At the fair there were many old fashioned crafts, livestock shows, and a quilting competition. We stopped at an Amish farm (wheat field shown above) and bought some corn and tomatoes.

The Lehigh Valley Historical Society has done a good job in preserving the sites and promoting the teaching of history. It is amazing to think that this region was once on the frontier of America. The farmhouse below is from 1756 and is typical of the early frontier Pennsylvanian Dutch farms.

It is nice that people recognize their heritage and remember the historical roots of America. With modern American culture, so much is homogenized that most US cities and towns are indistinguishable from each other. There is a lightly distinctive feeling of uniqueness here and the rolling hills of corn and wheat, the Mennonite horse carriages and the beautiful stone farm houses bring back memories of the first American settlers. It was a good way to spend birthday number 237 of the United States of America. Here in Pennsylvania, so close to many sites (Valley Forge, Gettysburg, Philadelphia) that played an important role in forming our nation.

Update: John Isner lost in five sets last night to Novak Djokovic. He made Novak work hard and we have a new favorite player from the USA. Good on ya’ John. Serbia advances to play Croatia

This weekend Serbia is playing the USA in a Davis Cup Tennis round of 16 “tie.” Tie is Davis Cup speak for team match. Nadia and I attended the “rubber” yesterday, which was the middle doubles match of a 5 match series. A Davis Cup tie consists of 4 singles matches and 1 doubles, and the country that wins three, wins the tie.

We really enjoyed yesterday’s game between the Serbs (shown above) Janko Tipsarevic and Nenad Zimonjic and the USA team of 6’9″ John Isner and Bob Bryan. Nenad is the number one ranked doubles player in the world, but he usually plays with Daniel Nestor, a Serb born in Belgrade but Canadian-raised. Instead of Nestor, who can’t play for Serbia because he represented Canada in Olympic and Davis Cup play, Janko played with him. Tipsarevic is currently ranked #36 in the world and is the third ranked Serbian tennis player behind Novak and Victor Troiki. Isner was playing for the US in place of Bob’s twin brother, who contracted food poisoning. (I wonder where he ate?) Isner looked really good and should be playing more doubles tennis. He is suited for doubles with his powerful serve and quick reactions at the net. His mobility is not a factor in doubles and I hope he takes my advice and plays more doubles.

The US duo were clearly the stronger team and won in four sets. This gave the US their first win after losing the two singles matches American Sam Querry takes on Victor Troiki (#35 in the world) if necessary.

Whoever wins this tie will advance to the quarterfinals to take on Croatia in Croatia. A Serbia – Croatia will be a fascinating match and the first time the two nations have met since the breakup of Yugoslavia in the Davis Cup.

The Davis Cup is great and it has created a buzz in Belgrade. They even made a clay court in the Belgrade Arena to give the hosts an advantage. But what is lacking however, is a world buzz for a world championship event. I propose big changes in the event to make it better.

First, I would play the whole tourney in a two week Grand Slam format instead of stretching it over the year. Currently, they play Davis Cup weekends during lulls in the over crowded ATP schedule. It would be like the World Cup of Tennis and the top 8 teams in the world would be invited. You could have a playoff to determine teams if there are several closely rated countries. It could become the fifth Grand Slam on the ATP Tour.

The current Davis Cup is to determined by surface and host. Usually, the home nation wins because it has the crowd behind them and they choose the surface that best suits their players. In my Davis World Cup, I would have the surface selected randomly for each rubber, then the teams would have to find their best on a variety of surfaces. To make it even more interesting, lets select the surface AFTER the players have been selected to play. The four surfaces would be clay, grass, two hard court surfaces, perhaps one indoor and one outdoor.

It think if they select a good time, it would really take off and be a big event. I think the best players would play and there would be more worldwide fan interest.