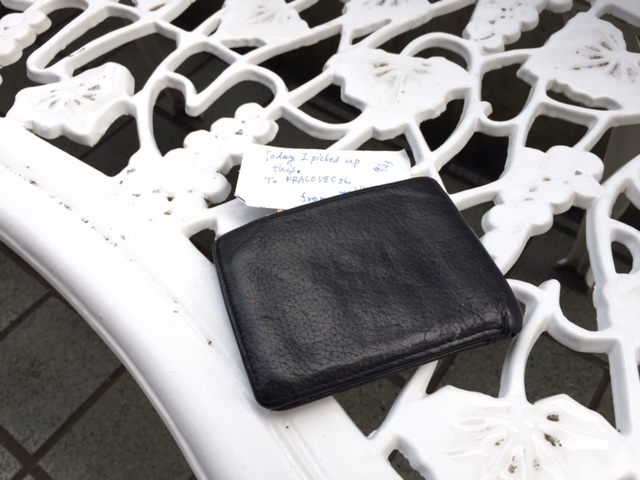 A couple of weeks ago I lost my wallet. It fell out of my pocket/bag on a ride home one evening. I realized it the same night and searched the entire route from the store to my home in my neighborhood, but could not find it. It caused much angst in our family because if I didn’t get it back, it would mean hours of obtaining new identification cards, a driver license, credit card, etc.

A few days later, it turned up on the bench outside my front door with a note stuck inside. All the money, credit cards and identification cards were inside as well, untouched. On a gum wrapper the person who found my wallet wrote, “Today I picked up this. To KRALOVEC 9/23” and he left an email address. I contacted him and thanked him profusely and asked where he found it. He apologized for looking up my address (on my Japanese residence card, my home address is written on the back) on Google maps to find my home.

This is typical of Japanese society. Everyone has a responsibility to help out each other and they are always concerned about others’ feelings and they do not want to disturb others. Now there are good people everywhere, but I would guess here in Japan, there is a higher chance of my intact wallet getting back to me than in other countries.

There is a downside to this mentality, but in most ways it is quite good. It is one of the best things about living here, especially with children. They will be safe and looked after. Single women are not cat-called or harassed by men (except on trains occasionally by drunk salarymen). The elderly are respected.

This article appeared in the Atlantic recently. It is hilarious to see very young children, some that don’t look more than 8 years old, taking public transport and walking to school alone. There are several reasons they can do this.

The first is overall, Japan is one of the safest countries in the world, and this bears out in the crime statistics.  Japan ranks at the bottom (in a good way) in every category of crime. Here is how it compares to the USA and other OECD countries. (all categories are per 100,000 people)

Second, public transport is safe and is the preferred mode of transport over private cars. In my city of Osaka, 24% of all trips are by bicycle, 24% walking, and 36% by rail. Private transport is only 15% . Compared to Chicago (63% private), New York (33% private) and Sydney (63%), this shows that Japanese society has a reliable system of public transport, used by most people, not just the poor or urban population. It helps to be in a high population density environment. As in other European countries, government policies make it more difficult and expensive to use private transport.

Third, and the most important in my opinion, is what the Atlantic article describes,

What accounts for this unusual degree of independence? Not self-sufficiency, in fact, but “group reliance,” according to Dwayne Dixon, a cultural anthropologist who wrote his doctoral dissertation on Japanese youth. “[Japanese] kids learn early on that, ideally, any member of the community can be called on to serve or help others,” he says

People care about and trust others! That is so refreshing to live here and know that everyone is looking to help others. I don’t see this level of caring or trust in any other society I have lived in.